Oriole Magic - Orioles Clinch a Spot in the Playoffs

For the first time since 1997, the Baltimore Orioles will be playing baseball after the regular season ends. 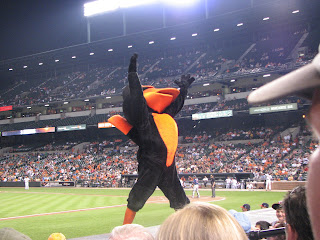 In 1997, the Orioles led the division wire to wire; I was a senior in high school.  I was able to follow the season every morning by discussing the previous night's game with an art teacher at my school.  She wasn't my art teacher, but she shared a classroom with us and her planning period was during my class.  She actually gave me a team photo of the 1997 Orioles when it was sent to her by the Baltimore Sun.  I still have that photo.

That year was long before blogs and social media permeated our lives and culture, so this year, I have been able to follow and discuss each and every game, mainly by following Roch Kubatko's blog on MASNSports.com.  This year was also the first year that I have been a subscriber to Dish Network.  I canned my cable company in favor of Dish because, well, my cable company refused to carry MASN.  I told my wife before spring training started that we were getting Dish for the sole purpose of being able to watch O's games.  I think I have either watched on TV or listened on XM, probably 90% of O's games this year.  I think the ones I have missed were a couple west coast games, or daytime games while I was at work.

I could not have predicted that this year's Orioles would make the playoffs.  They have used 52 different players this year.  Seemingly, a shuttle was running from Camden Yards to Harbor Park (Norfolk's stadium) to the doctor's office.  Yet, they remain tied with the Yankees for the AL East lead with 3 games to go.  It isn't out of the realm of possibility that the Orioles could surpass the Yankees.  It will be tough for the O's to win their upcoming series with the Rays, but the last time they played each other, the Orioles swept them.  So, it could happen.

This year has been so improbable.  Seeing Chris Davis slam 31 home runs AND record a win as a pitcher while striking out Adrian Gonzalez.  Or Manny Machado starting at third base after beginning the year at AA Bowie.  Or how about Dylan Bundy starting the season at Low A Delmarva and now residing in the bullpen.  Oh yeah, you can't forget the mysterious appearance of Miguel Gonzalez, an oft injured pitcher who was released by the Red Sox organization only to be discovered in the Mexican League by the Orioles scouts and signed to a minor league deal.

I don't know what the Orioles will be up to next week, but my hope is that they will be working their way deep into the playoffs.  In years past, it would be really easy to count them out, but this year, they have scratched and clawed their way through the season and now, they, as much as any of the other 9 teams, have a decent shot of heading to the World Series.

Posted by William Regenthal at 7:17 AM

Awesome game of the O's and very well written. Keep us up to date!

I'll be pulling for them, just for you!