It All Comes Down To This

I am so exhausted.  Thankfully, this series will be over tonight.  I want the Orioles to win, but this has got to be the most agonizing series I have seen them play in some time.  I, of course, wouldn't have it any other way.  If the Orioles win, they will have beaten a team that has wiped the floor with them too many times to count.  A true rival.  You all know how much I hate the Yankees, but they are the greatest dynasty in sports for a reason.  Any title worth winning typically has to go through New York. 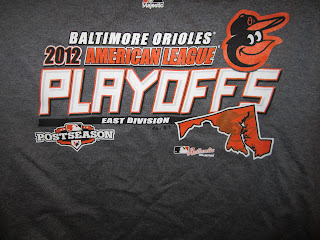 Every game in this series has been a nail-biter.  Each game was either tied or within one run coming into the 9th inning.  The Orioles have had a lead in each game played, so far.  Every home run hit in the series by either team has been a solo home run.  Alex Rodriguez, the highest paid player in the game is being benched in a do or die, deciding game 5.  The Orioles' biggest threats, Adam Jones and Matt Wieters and the Yankees big guns, A-Rod, Robinson Cano and Curtis Granderson have all laid eggs with their performances.

I can't wait for the game tonight, but, more importantly, I can't wait until it is finally over and my stress level can decrease a bit.

A win tonight, for me, would almost be the equivalent of winning the World Series.