I feel like more of my friends and family are fans of the Yankees than any other club.  My dad grew up in Bethesda, Maryland up to 1970 before my grandfather accepted a transfer with his company to Winston-Salem, NC.  One would think that Dad might have grown up an Orioles fan, but according to him, he isn't a baseball fan (according to him, he would rather "watch paint dry.").

My mom is a Yankee fan; she has been since the 70s and Thurman Munson.  She also appreciated Don Mattingly in the 1980s.  I remember hearing her go "Ha Ha!!!" during the Jeffrey Maier play in the 1996 ALCS while I was watching the game in my room (I may or may not have been crying).

My older brother, Philip, is a self professed Yankee fan and he loves to call me and gloat about the Yankees' latest exploits.

My wife's grandfather, being from New Jersey, is a huge Yankee fan, and anytime I talk with him, he has to give me a hard time.  I love talking to him, though, one reason is that he sounds like DeNiro.  I love hearing him talk about "Derek Jetuhsz", haha.

One of my best friends is fellow blogger, Drew, and he has been surprisingly quiet leading up to tonight's game.

Pete, from the blog Dropped Third Strike, is also a huge Yankee fan.

My point is, more than any other team, I stress the most about the Orioles playing the Yankees.  If the O's are beaten by the Yankees, I always get phone calls.  In years past, it was more obnoxious, but this year, I feel like most of them respect what the Orioles have been able to accomplish.  The Yankees are and forever will be my least favorite team, but I do respect the hell out of them. 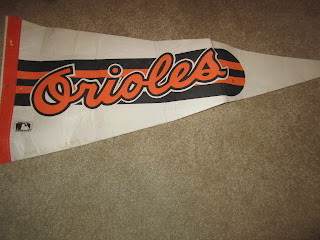 A trip through the postseason for the Orioles wouldn't mean as much if it didn't pass through New York.  There is some kind of validation when the Yankees are the team to beat, and I think the Orioles have a good shot at taking this series.  It definitely would mean a lot more for the O's to beat the Yankees and I sure hope the O's have a good showing.
Posted by William Regenthal at 2:19 PM

Prior to the 80's I didn't really have a favorite team. In the 80's you and your brothers ragged me to pick a team and I think I picked the Yankee's because they had the cutest players(important criteria)> I dislike all of those people who only like a team when they are winning so once I picked the Yankee's I stuck with them through good and bad.
I just want you to know that no matter who the Oriole's play I will be pulling for them to win. I want them to go all of the way, Just for you.
Love you
Momma

Good luck dude, it should be fun, to say the least