Congratulations to the Giants and Their Fans

Well, the World Series is over and the Giants have taken home their seventh championship and second in three seasons. 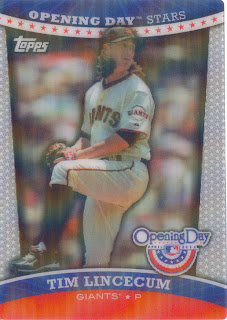 They swept the Tigers in 4 games and their pitching staff just dominated.  Tim Lincecum, my son's favorite player, was lights out out of the bullpen.  Chris was really happy that the Giants won, having claimed them as 'his team' recently.  He is lucky in that he is only 6 and has already seen them win the World Series twice.

I was listening to XM this morning and they were discussing whether or not the Giants can be considered a dynasty.  That was food for thought, since they have already won two titles and are poised to make a run again next year.  I believe that they have as good a chance as any and will really do well if their pitching staff can maintain the success they had this postseason.  They also need Tim Lincecum to put up better numbers next year than he did this year.

What do you guys think?  Personally, I would be fine if they don't repeat next year if that means that the Orioles win!
Posted by William Regenthal at 6:12 PM

I hadn't really thought of them as a dynasty just yet. I think they'd have to win one more WS. I don't think that will happen next season since the O's will win their first WS in 30 years.

I think they need one more title to be a dynasty but with their pitching in tact next year they should make a run at the playoffs. To counteract Stealing Home, how about a