Off of the Want List - 2009 Topps Silk Nolan Reimold

I felt like I had been neglecting my want list a few months ago when the only things I was knocking off were HOF signed baseballs.  So, I updated the list for the 2012 National Card Show and have been trying to keep up with it ever since.  Since I did that, I have added several Nolan Reimold parallels to my collection.  I have gotten lucky recently in being able to find the ones I need. 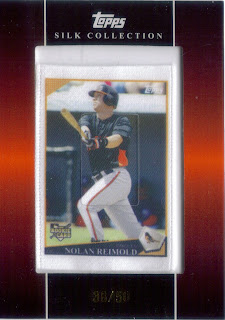 One of the cards I got in the mail yesterday was the above 2009 Topps Update Silk Nolan Reimold #36/50.  I had been looking for this card for a while and could never come across any at shows or Ebay.  Luckily, someone finally posted one on Ebay and I grabbed it.  This is considered a rookie card, so it carries a bit of a premium, especially among Reimold fans.  I have only seen this one since I have been looking, so it doesn't look like too many people are willing to part with them.  I'm glad I added it, though because I need to make room on my want list for all of the 2013 stuff that will be coming out before you know it.
Posted by William Regenthal at 5:36 PM