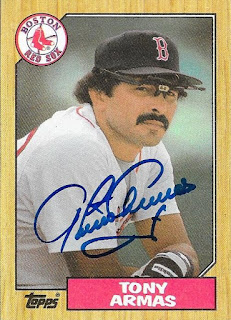 That, my friends, is a nice signature.  I sent to Tony Armas via a private signing, and the card turned out amazing.  I was so happy with how the signature and card look; it was well worth the TTM fee.

That 1987 image is ingrained in my mind for Tony. Nice signature as well!