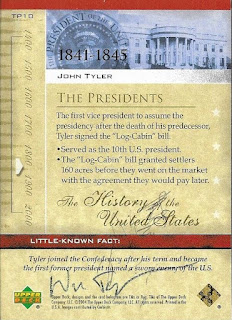 There isn't much to it, but this is a TTM success from the grandson of former President, John Tyler. Let that sink in for a second. Harrison Tyler, who is 92, is the grandson of the 10th President of the United States. Due to some "late-in-life" progeny, his roots stretch for. Very long way across time. I thought it was really cool when I read about him several months ago. It turns out that I am very lucky to have gotten the card signed, as Mr. Tyler jas suffered a series of strokes recently. Upon the passing of his older brother (who was 95) last year, he is the last living grandson of President Tyler.

John Tyler (b. 1790 - d. 1862) was President from 1841-1845 after assuming the role upon the death of William Henry Harrison. Not considered one of the better presidents in history, he was still among the short list of Americans who have held that title. He also fathered 15 children in his life, which helped his line extend as far as it has.

I mailed to Harrison Tyler on October 16 and got the card back on January 15, for a 91-day TAT.

Posted by William Regenthal at 12:16 AM