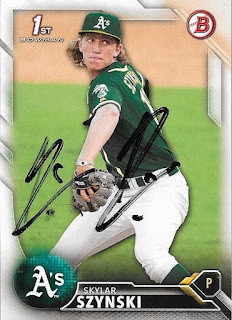 I added this nice 2015 Bowman Draft of Skylar Szynski to my autograph album when I got it back TTM from him.  I had to search his address and take a shot, but it worked, and the card turned out pretty well.

Szynski (b. 1997) was a 4th round pick by the A's in the 2016 June Amateur Draft out of high school.  He played in Rookie ball in 2016 where he went 0-3 with 8 strike outs and an 8.10 ERA.  Szynski remains in the A's system after missing the last several seasons due to injury.  According to MILB.com, he is on the Midland Rockhounds roster.

I mailed to Szynski on January 4 and got the card back on January 15, for an 11-day TAT.

Posted by William Regenthal at 10:02 PM