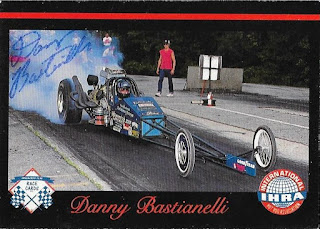 It took a brave 8-year old to walk up to a race car driver and ask him for his autograph.  I was nervous, but I recognized the car and had to ask the driver for his autograph.  I walked up to his trailer and told him "You beat my dad, so you must be good.  Can I have your autograph?"  That piece of paper that I got signed back then is still around here, in a frame among a bunch of my other signed photos and memorabilia.  The best part of it, though, is that my walking up to him and asking him for his autograph former a friendship that has lasted 30+ years.  Supposedly, he walked up to my mom later on and told her how much I impressed him with what I said.  After that, I became his honorary crew chief.

Danny Bastianelli beat my dad in the finals of the 1989 IHRA Winternationals in the Top Sportsman class at Darlington Dragway.  I had spent the weekend, pretty much in one spot, along the fence near our race trailer picking up bottle caps, spark plugs and other stuff I found on the ground.  I also befriended one of the race officials who was stationed on the other side of the wall and probably drove him nuts with all of my questions.  My brothers would come by and play a bit, then they would go off and do whatever.  Mom would come and check on me, or tell me it was time to eat; otherwise, I hung out that entire race by the wall.  I couldn't actually see what was going on; the race official would tell me "Your dad just won again."  Until the race was over, Dad had finished the best he ever finished at a National event.  That was big time for us.  We weren't even supposed to be there that weekend.

At the last minute, Dad decided we would go to Darlington.  I remember we left super early in the morning.  He didn't even qualify for the race; he was an "alternate", allowed in when one of the many top qualifiers ditched Sunday eliminations because the Quick Eight Shootout the night before was a bigger draw for some.

Dad ended up on ESPN after that race.  The car he drove was wildly popular.  It would pop wheelies and had injector pipes sticking out of the hood.  Danny beat him in the finals when Dad's rear end on the car broke and deposited the wheel tubs onto the track.  The little Corvette was falling apart, but man it was wild.

After meeting Danny in person at a race in Mooresville, we would see each other along the trail that season, and at tracks as the years went by.  He became one of the most colorful bracket racers that the sport of drag racing has ever seen.  He would keep in touch with me and my family with mewspaper clippings, photos and the like.  Finally, Facebook has helped us continue to keep in touch.

I got to looking on COMC recently for Dad's 1989 Checkered Flag card (same set as Danny's above) because it had the Vette on there with the injectors (my favorite of all of Dad's rides), and the version I had was beat up and tattered from 30+ years of love.  I bought the card of Dad listed on COMC, then I thought it might be cool to grab a couple others of some guys from back then.  I bought both cards listed of Danny, of course, and I also bought two of another driver who will be shown on here soon.  I thought it would be cool to add a couple of them to my TTM album, so I sent off a Facebook message to Danny and asked him if it would be ok if I sent a couple cards his way for TTM.  He agreed... and sent me 5 of his own cards, signed.

I've always had a short list of favorite drivers.  Dad, of course.  The legendary Shirley Muldowney, obviously.  Danny Bastianelli is and will always be another who I rank as one of my top all-time favorites.  I'm glad we kept in touch all of these years and I am super happy to add him to my autograph album.  Thanks for the signatures, Danny!

Posted by William Regenthal at 10:50 PM

Wonderful story, thanks for sharing!