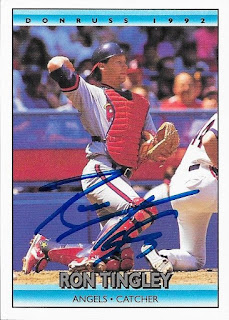 It has been some time since I have gotten a 1992 Donruss into my autograph album, but I did, with this TTM success from Ron Tingley.  I had so many 1992 Donruss, because I was busting packs trying to get the Cal Ripken Elite Autograph.  I finally found one of those at the National a few years ago.  Left behind was a ton of 1992 Donruss base that I had no idea what to do with.  Many of those have gone, but a few remain in my boxes.  It is a nice, simple design, and looks nice when signed. 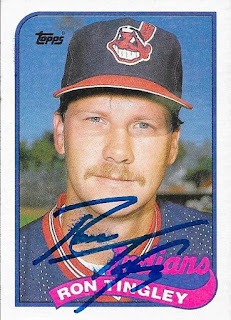 I also got a 1989 Topps signed.  These, too, are prevalent in my boxes, since 1989 Topps is one of the most over-produced sets out there.  Still, that is a nice design, and still one of my favorites.

I mailed to Tingley on December 2 and got the cards back on January 23, for a 52-day TAT.

Posted by William Regenthal at 9:38 PM