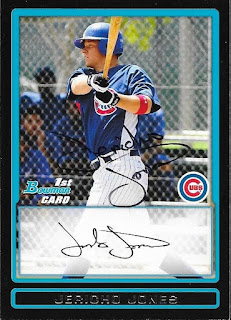 He has one of the best names that I've seen recently and I was able to get Jericho Jones to sign my 2009 Bowman TTM.  Not only does he have a cool name, he also has a great signature, even though it is a little tough to see on this scan.

Jones (b. 1987) was a 20th round pick by the Cubs in the 2008 June Amateur Draft out of Louisiana Tech University.  He played 2 seasons in the Cubs system, reaching High A.  He had 75 hits, 5 home runs and a .273 batting average.  After his two seasons in the minors, Jones answered the call to the ministry where he now serves as a youth pastor.

Posted by William Regenthal at 10:59 PM