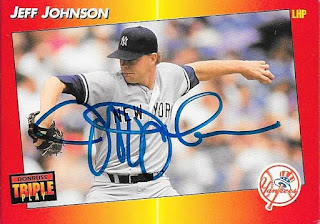 Here are a couple early 90s cards that I got signed TTM from Jeff Johnson.  The above 1992 Triple Play turned out really well.  This set was the bottom of the barrel, as far as quality and price point went back then, but it was a decent-enough set.  The cards stand out, and you could get your hands on boxes of these really cheaply; especially at Sam's Club (thanks Mom!). 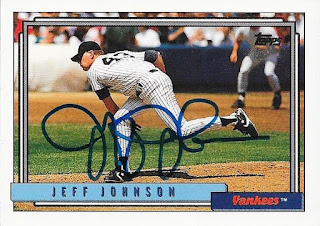 I also got Johnson to sign a 1992 Topps, which turned out nice, also.

I mailed to Johnson on December 4 and got the cards back on January 15, for a 42-day TAT.