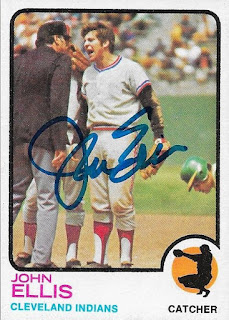 Action shots on cards usually tend to be the best looking ones when they get signed.  At least in my opinion.  The above 1973 Topps that I got back TTM from John Ellis really is a cool card, not only because of the argument with the umpire, but also because of the airbrushing.  The prior season (1972), Ellis was with the Yankees, not the Indians.  So, that would explain why there is no logo on his uniform.  Also, those stirrups are juuust a little too bright compared with the rest of the photo.  Still, it is a really good airbrushing job, especially on an action shot.