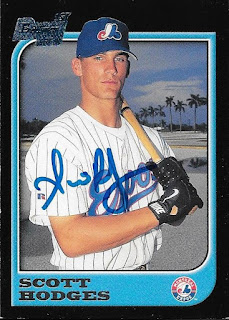 This 1998 Bowman was signed TTM by Scott Hodges.  I had gotten a bunch of older Bowman (from 1997 to 2002 or so) in one of the boxes from my former LCS and I decided to send off some of the older ones to try to get them signed TTM.  A lot of the players, I had never heard of before, and Hodges was one of them.

Posted by William Regenthal at 9:53 AM