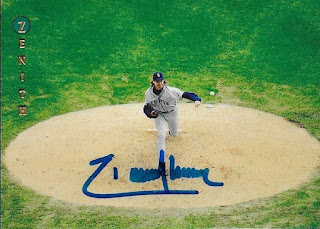 I wasn't going to buy in on the Randy Johnson signing that my friend, Jackson, was hosting.  It was too rich for my blood, but the more I thought about it, the more I wanted to send off a card.  I wanted to support my friend, but I also had a card in mind that I wanted to send to the signing.  It wasn't the above 1997 Pinnacle Zenith.  It was the green chrome parallel below.  It wasn't until I found the Zenith in a box from my former LCS that I really wanted to send in.  Pair that with the National finally being canceled for 2020, I took some of the money I had saved for the National and put it toward the signing.  Since I couldn't decide on one card, I sent both.  The Zenith turned out amazing and may be one of my favorite signed cards in my collection now. 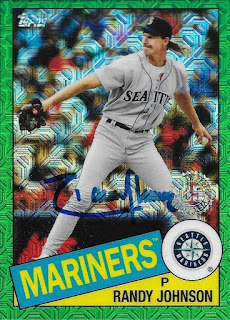 The 2020 Topps Silver Pack 85 Chrome green parallel also looks awesome.  It is numbered 18/99 and was a really nice pull from a pack back when I busted my 2020 Topps boxes.

Jackson has been doing a ton of signings lately, and I hope to join in on some more.  I mailed to the signing on November 14 and got the cards back on January 19, for a 66-day TAT.

Posted by William Regenthal at 7:54 PM

Both cards turned out great, that Zenith card is awesome!