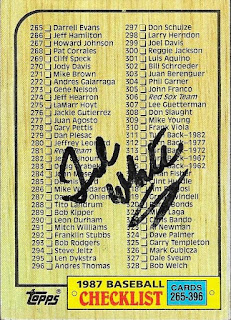 He isn't a baseball player.  He is a new subject for an 87 Topps checklist, mainly because for some reason, I didn't have any acceptable cards of him, but I added a new autograph to my 87 album of a  Hollywood stuntman and actor.

I have a ton of 1987 Topps checklists, and I have stated before, but I plan on adding signed checklists of folks who were active (in the loosest of terms) in the year 1987.  For that reason, I will paint a bit of a picture of why I sent to White, and how he fits into my project.

Imagine if you will, it is the summer of 1987 and five brothers ranging in age from 11 to 4 are staying up late on a Friday night.  Ok, well, maybe the 4-year old is already in bed; he didn't really get to stay up late until a few years later.  Anyway, FOUR brothers staying up late, watching late-night HBO or popping a tape in the VCR, while Mom and Dad are asleep.  Yep, time for a good horror movie!  One of the staples of those nights was Friday the 13th The Final Chapter (Part IV, if you're scoring at home).  Yes, we all know that there were 8 sequels after the final chapter, but come on.  Jason is hard to keep down.  My older brother was born on a Friday the 13th, so he was a huge fan of the series, and Part IV was the first one we owned on VHS.  Adding the autograph of the guy who played Jason in this movie fits right in to my project.  See?  It does make sense.

Anyway, Part IV is one of the better films of the series and stars folks you have actually heard of like Corey Feldman and Crispin Glover (pre-Back to the Future).  I've probably seen this one more than any of the others in the series (with Part 6 a very close second).  When I saw that Ted White signed TTM, I jumped all over sending to him.

White (b. 1926) has been an active actor and stuntman from 1949 to 2020.  Formerly a football player for the University of Oklahoma, White began acting in 1949 in the film Sands of Iwo Jima.  He worked as a stunt double for John Wayne in several films.

White sells autographed photos on his website, and I probably should pick up one of his signed Jason photos to put with my auto of Kane Hodder (who also played Jason).  At 94 years old, White still makes the horror-con circuit.

I'm really glad I sent the card to White to sign, as it turned out really well.  Recently, I got a couple other checklist back signed from other folks, so you'll have to stay tuned to see who they are of.