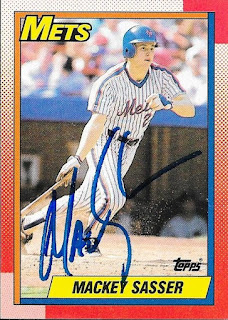 I received a TTM success from former catcher, Mackey Sasser on quite a few nice cards.  This 1990 Topps turned out really nice.  Some folks give this set a hard time because of the borders, but I enjoy that it is different.  I like it when Topps does that from time to time. 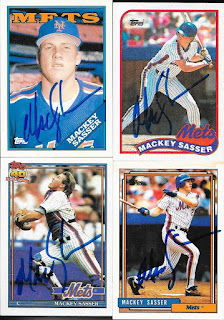 The folks who don't like the 1990 Topps likely enjoy these white-bordered versions.  The top left one is actually a 1988 Topps Traded, but is still typical of that year's design. 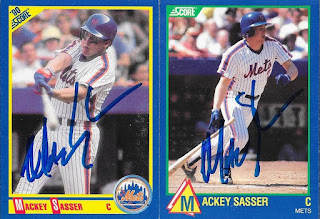 I also added a couple Score cards, since they tend to be under-represented in my album.  I liked both of them,  but the 1990 Score on the left is a really nice card.  The card on the right is a 1989 Score Rising Star, but looks eerily similar to the 1990.