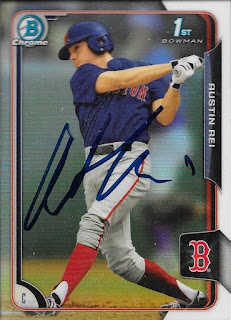 It was bound to happen.  I have dove headfirst into graphing, and have been really successful so far this season.  Each of the teams that I have worked on has been pretty good, and I usually come away with huge hauls.

I planned a trip to Zebulon to see the July 4 fireworks at Fuve County Stadium, and decided to take a shot at the Salem Red Sox, since I missed them in their only trip to Kinston this year.  What ensued was the worst experience I have had, so far, while graphing another team.

I had picked up a bunch of nice Austin Rei cards from the LCS, only to have him sign one per, and pick the worst card of the bunch.  This 2015 Bowman Chrome is actually a refractor, but it doesn't show up in the scan.  I'm not complaining, though, because I can get Rei through other sources.  Still, I wish I had known he would only do one; I would have handed him the card I really wanted signed. 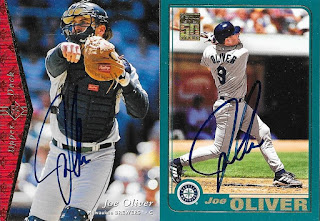 Salem's manager, Joe Oliver, signed 2 of the 4 cards I had, and they turned out great.  He was actually really nice.  I have a friend who graphs Salem, and he has said that Oliver can be a chore sometimes.  So, I was happy to add a 2001 Topps to my autograph album, and also this 1994 UD SP. 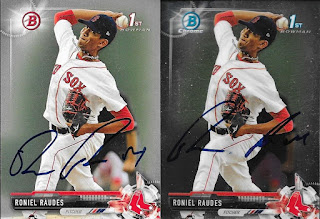 I also helped my friend, Gerard, out with a 50/50 on Roniel Raudes, and I got a Chrome and paper Bowman from 2017 signed.  He was really nice, and I was glad to at least get something done for Gerard.

The worst part was being refused by the rest of the team.  I get it that they are there to do a job, but when they look right at you, ignore you, and keep walking, well, it leaves a bad taste in your mouth.  I had asked Paul Abbott if he could sign, and he said he couldn't before the game.  So, I politely asked him if he would have time after the game, to which he replied, "Hey, if you get me, you get me."  So, after the game, as he was walking by, I asked him if he had time now, and he looked at me and kept on walking.  Didn't say a word.  So, I won't be worrying about getting his stuff signed.  I will just give them to my friend, Dylan, who sees Salem all the time at home, and he can have them.

I also got passed over by Josh Ockimey, but he was a lot more polite about it.  I had bought a gold chrome Bowman of Marc Brakeman, but apparently, his uniform number has changed, as another player was wearing his number.  So, I was just pretty disappointed in the outcome of this chance to graph them.  I'll chalk it up to a bad experience, but I'll move on and see what happens this weekend.  Maybe it was the stadium, or maybe it being 4th of July.  I just hope I have more successes in the future.
Posted by William Regenthal at 7:22 PM