TTM Success - Two for the Price of One, Matt and Misty May Treanor 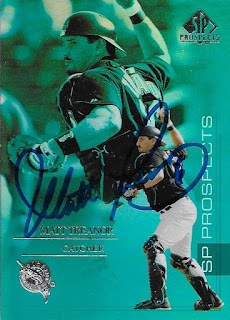 I got some nice cards back a few days ago that have been out for a while.  All of the TTMs I have gotten in the last couple of weeks have been ones that I have been waiting a while to get in.  This success from Matt and Misty May Treanor was one of the best, though.

The above 2004 SP Prospects turned out really nice.  It scanned really well, also.  I powdered this one, and it helped out, as the signature looks about perfect. 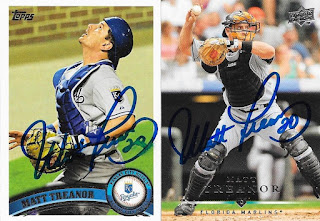 I also had these two cards that turned out nice.  The 2011 is an Update series, so it won't count toward my Topps Project, but it still is a nice card. 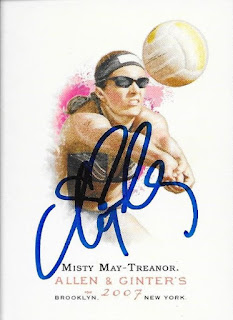 While looking for Matt Treanor cards, I found this Allen & Ginter card of his wife, Misty May Treanor.  I tossed it in my envelope, not expecting much, but it came back signed with Matt's cards.  Awesome!

Misty May Treanor (b. 1977) won the Gold Medal for beach volleyball during the 2004 Olympic Summer Games without losing a set.  Teamed with Kerri Walsh, Treanor won the Gold in the 2008 and 2012 Summer Olympics, as well.