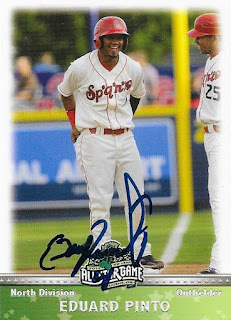 I've been realy busy the last week or so by getting cards together and doing some Wood Ducks graphing.  I completed some 50/50s with the Dash and Pelicans, as well, for my friends, Andrew, Dugan, Nick and Gerard.

I had bought this Eduard Pinto off of Ebay because I wanted to be able to get some more of the Wood Ducks.  I'm glad I got Pinto when I did, because he was traded yesterday to the Blue Jays for Jason Grilli.  This All Star card from last year turned out really nice. 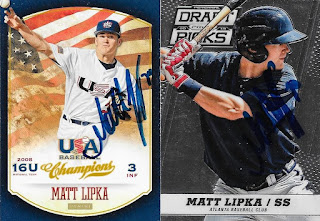 I have 4 cards left from a 50/50 with Gerard, and he is the toughest person on the Wood Ducks to get to sign.  He actually stopped before stretching the other day and signed a couple cards, one of which was the above Panini Prizm that I had found in my rookie box.  The Team USA card was from Gerard. 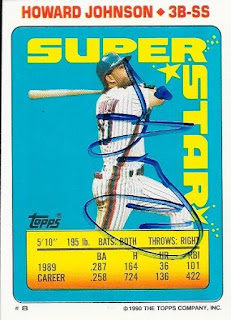 My wife was kind enough to help me out during a couple of the games so I could knock down the number of cards that I have.  A few of them didn't turn out all that well because we grabbed a crappy sharpie, but they are ok, I suppose.  I was happy to finally get this Topps Sticker from 1990 signed. 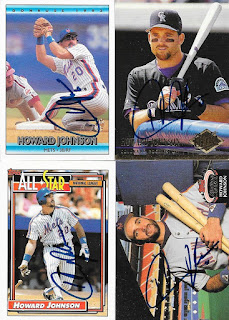 I also got a few of Gerard's cards signed, along with these that were mine.  Max gave me the top right Fleer Ultra, which turned out great. 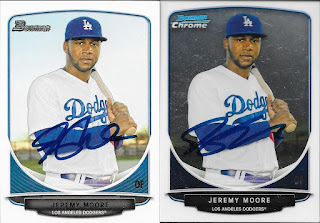 I got all of Gerard's 50/50s for Jeremy Moore done, but the coolest thing was that I was able to wish Moore a happy birthday the other day.  I surprised him that I knew, but he was happy that I remembered nonetheless. 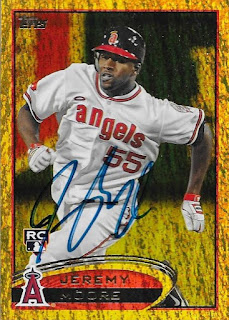 This Jeremy Moore turned out the best of all of them.  I loved the golden parallels, and adding this to the album was pretty great. I finally was able to get Bobby Rose on the lot of cards that I picked up early this season.  I got him twice during the last two games that I went to, and he was really nice both times. 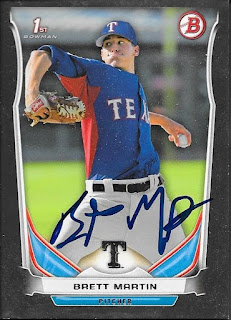 I was happy to add a bunch of Brett Martin cards.  He is back on the active roster, and pitched decent for his first time back on Thursday. 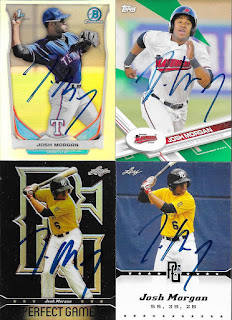 I have officially exhausted my supply of Josh Morgan cards.  I bought the top right green parallel from Pro Debut on Ebay; I found the top left 2014 refractor at the card shop, and the two Perfect Game cards were nice touches as well (left was Ebay and right was from the shop). 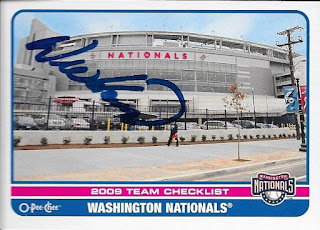 II wanted to get another Willie Harris signed, but I couldn't find an more of his cards in my boxes.  I found this 2009 O Pee Chee Nationals team card, and Harris is listed on the back, so it counts. 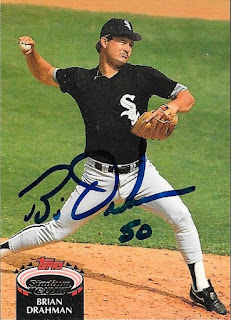 While I was looking for Harris cards, I did find this 1992 Stadium Club of Brian Drahmann that I hadn't gotten signed before.  It turned out great. 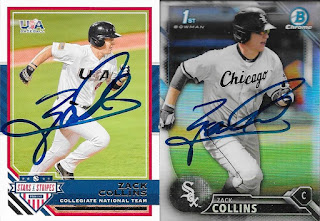 One of the casualties of the crappy Sharpie that my wife picked up was a Bowmans Best Zack Collins.  I ended up giving that card to Chris anyway.  I got these two Collins from two different games, and they look great.  I had actually pulled the Team USA card from a pack, so I was really happy to finally get it done. 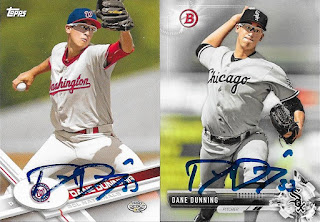 I got a few more Dane Dunning cards signed, including the above (left) Pro Debut.  I still haven' been able to open a pack of this product, but I really enjoy it.  I plan on looking for some boxes of it at the National. 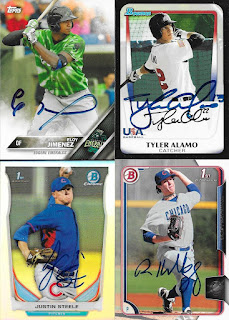 I have gotten all of the Myrtle Beach Pelicans signed that I had set out to get, with the exception of a couple Eloy Jimenez.  I am going today to try to wrap those up, and this is the last time the Pelicans will be in Kinston.  I found the above (right) Tyler Alamo in my rookie box, and I know it has been in that box for years.  I was happy to see it make the light of day, and get a place in my album. 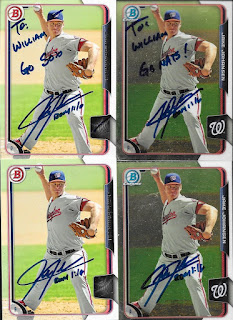 Jumping back to the Dash, I was really happy to get these autographs from Jake Johansen.  He was one of the friendliest players that I have talked to.  He asked me my name, and took the time to inscribe two of the cards to me.  My friend, Matt, went with me to a game on Saturday, and he was talking about really nice players who seemingly are stuck in High A ball.  Johansen was one that he brought up.  I am happy to report that Johansen was recently promoted to AA Birmingham!  I hope he can continue to move up and make the majors.  He is a really nice person.
Posted by William Regenthal at 1:04 PM