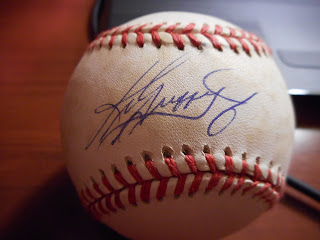 It took all 5 days of the National Sports Collectors convention, but I finally added another ball to my Hall of Fame collection.  I looked all throughout the show to find a Ken Griffey, Jr. ball, and found one right as I was about to leave the show today (stay tuned for posts about the other stuff that I picked up).