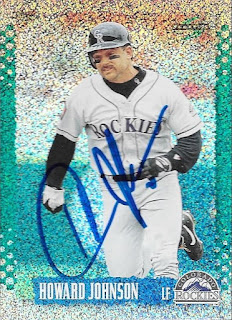 It is July 4, today, but when I take a look at the upcoming Minor League schedule, I can see that the season is drawing to a close.  The Wood Ducks finish their season in less than two months, and with my trip the the National coming up, I will be limited in when I can see them.  I will not see the Pelicans, Dash, or the Nationals at Grainger Stadium any more this season.  I have one three-game series against Frederick where I will have to work hard to get any Orioles prospects I want.  I have one more shot at Wilmington, and one shot at Lynchburg.  I can always supplement my time with a trip or two to the Mudcats, like I am today.  I missed a chance to get the Salem Red Sox, so I am catching them today in Zebulon with my good friend, Dugan.

With the games winding down, I have finished up most of the lots of cards that I bought early this season.  I have finished up Josh Morgan, Bobby Rose, all but one Brett Martin and most of the Hickory Team Set (guys who made it to the Wood Ducks at least).  I have answered all of my 50/50 commitments, with the exception of a few Howard Johnson for Gerard.

I did pick up some COMC cards of Johnson and some Lynchburg guys recently.  I think it was 6 Johnsons, and I got two of the signed last night.  The above 1995 Score Platinum turned out amazing; I'm glad I went with that one first.  Johnson has been doing two-per lately, so I will have to space things out and hope I wrap everything up by the end of the season. 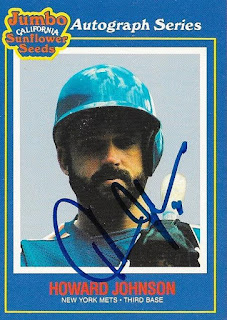 This 1990 Jumbo California Sunflower Seeds card was a nice rarity that I found cheap on COMC.  I thought it would look great in the album, so I picked it up.  I met a kid from Statesville at the game last night who couldn't believe that Johnson was the Wood Ducks manager.  He said that he tried to tell his dad that it was the same guy, and his dad wasn't buying it.  I bet his dad will be excited to see the two cards I donated to the kid, and then helped get them signed.  I also gave him 4 Bobby Rose and a Brett Martin, but we weren't able to get Martin to sign. 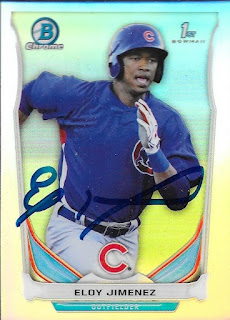 Finally, I got one last Eloy Jimenez on this 2014 Bowman Chrome refractor.  I tried to get one more card form Eloy at the end of the game, but he refused.  I think they were late and wanted to get a team meeting in before they left town.  The game was a 4.5 hour marathon that ended in the 11th with the Pelicans winning 11-7.
Posted by William Regenthal at 1:41 PM