Three Days of Graphing the Keys at Wood Ducks 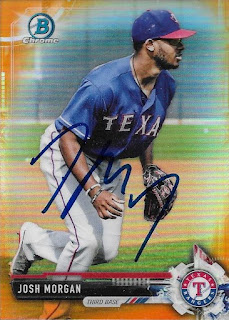 This was the most anticipated series this season at Grainger Stadium for me.  The Frederick Keys were scheduled for only one trip to Kinston this season, and I made sure I was prepared to rack some future Orioles, as well as some Wood Ducks.

I made a few COMC and Ebay purchases so I would have some "different" cards for this series, and I also raided my Orioles PC boxes for some players who were on the Keys.  Finally, I picked up a couple team sets to round things out so I could get autos of some guys that I may not have been able to, otherwise.

This 2017 Bowman Chrome orange refractor of Josh Morgan was an Ebay purchase, and turned out really nicely.  The card is numbered 6/25. 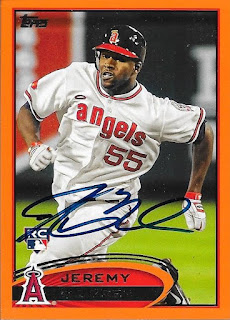 I had help, of course, for this series.  I had my son, Chris, and my nephew, Jacob, helping out.  Their payment was a couple stacks of autos, once I completed 50/50s for my friends Gerard and Andrew.  Another Andrew from Instagram sent along a couple cards, as well, which we were able to get taken care of.

The above Jeremy Moore was a COMC pickup.  He even asked about it, "Why is this one orange?"  I explained to him that it was a factory set parallel.  This card is numbered 60/190. 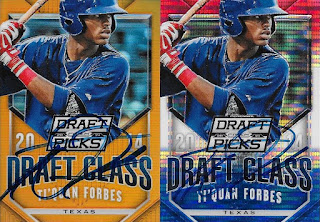 These Ti'Quan Forbes came from COMC.  The red white and blue isn't numbered, but the orange is numbered 45/60. 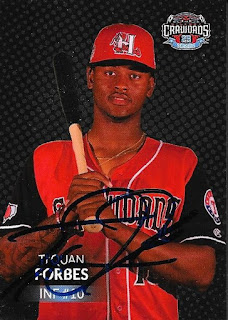 Since the Wood Ducks aren't producing a card set this season, I picked up the 2017 Hickory Crawdads set.  Several of their players have already been promoted to the Wood Ducks, so I went ahead and got a few signed. 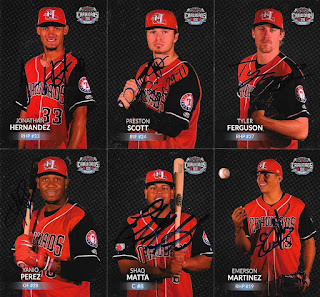 The cards are really dark, but they still turned out really nice.  I'm glad I was able to get a few of these guys, especially Shaq Matta.  He stops and chats with me briefly before every game, and always is smiling. 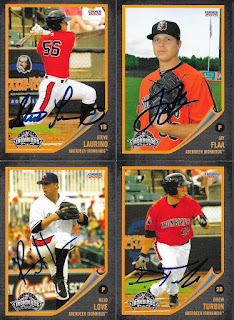 I also picked up a couple Aberdeen Ironbirds sets, hoping I could use some of them on the Keys.  I was able to get a few signed, which was nice. 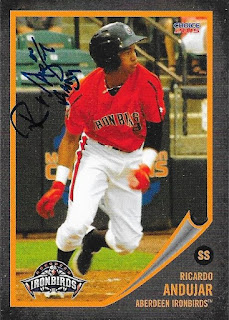 A couple of the players were in multiple sets, so I was able to get a couple different cards signed, Like Ricardo Andujar. 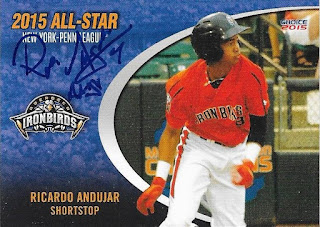 Andujar was a New York-Penn League All Star in 2015, so this card is pretty cool.  I like how he signed it, as well. 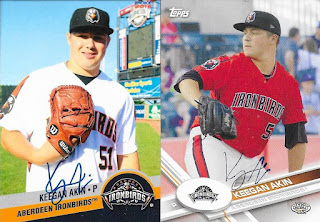 Believe it or not, I began looking up team sets because I wanted cards of Alexander Wells and Austin Hays.  I got those guys, but they aren't with the Keys.  The Keys guys were a bonus.  I was happy to get an extra card of Keegan Akin to go along with the 2017 Pro Debut that I picked up at the card show.  His signature is really small and thin, but I like it.  He was actually the first auto I was able to get during this series.

Randolph Gassaway has been in the Orioles system for a long time, as evident by the 2013 Bowman and Bowman Chrome.  He has been playing really well, as of late, and may be on the Orioles radar, finally. 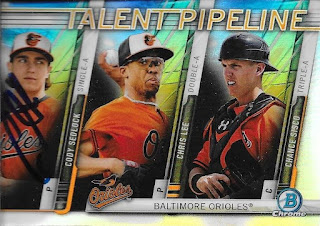 I figured that since Cody Sedlock was on the DL with a forearm strain (thank God it isn't a torn UCL), he wouldn't have made the trip to Kinston.  Thankfully, I was wrong.  We racked Sedlock.  He is such a nice guy.  He posed with the boys Sunday after the game, and on Monday, signed their photos. 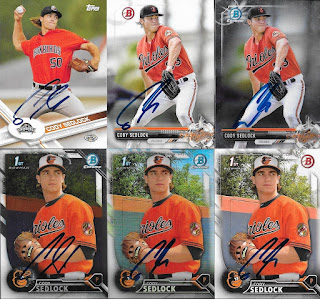 I got a whole bunch of different cards signed by Sedlock, and took care of all of my 50/50s. 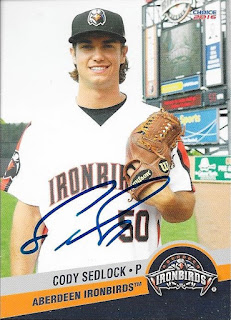 I even got his Aberdeen team set card signed.  On Tuesday, I wished him well, since I won't be seeing him anymore this season.  I hope he gets healthy and can contribute this season.  I am excited to see him progress, and he has two new fans in Chris and Jacob. 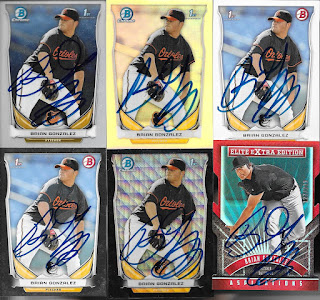 I had a bunch of Brian Gonzalez cards in my Orioles boxes, so I pulled all of them out and got all but one of them signed during this series.  They all turned out really nice, and will look so cool in my album. 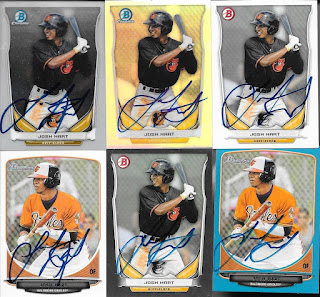 Josh Hart is another player who's cares were scattered all over my Orioles boxes.  I was really happy to get some nice parallels taken care of during this trip. 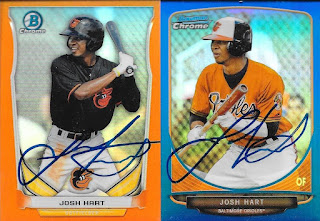 The orange refractor is one of my favorite cards in all of the ones I got signed. 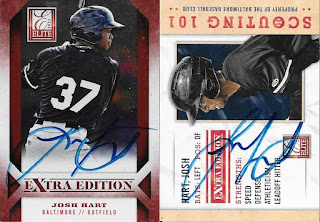 Hart is injured, and was another player who I thought I wouldn't be able to get while the Keys were in town.  I saw him come out onto the field right before the game started on Sunday, but I was able to get him post game.  He walked right up to me on Monday saying "You don't even have to ask me, I know what you want."  He then signed everything I had in my book at the time.  He was really nice, and smiled while signing.  I think he saw that my book was turned to his page (he must have recognized his cards), but my back was to him because I was answering a question for Jacob.  I turned around and there Hart was.  I thought it was pretty funny. 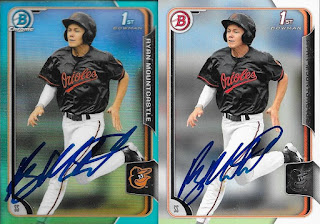 I was really worried that I wouldn't be able to get Ryan Mountcastle, mainly because I thought he would get called up before the Keys ever got to Kinston.  Luckily, he was still with them this week, and I was able to get every card I had of him signed.  He is one of the top Orioles prospects now, so I wanted to take advantage of my opportunity and get what I could done.  The cards will happily take a place in my album.

Mountcastle is in a bunch of different sets, so I had a lot of cards to choose from.  Trips to the card shop facilitated this venture as well, since Wendell has a few boxes of loose prospect cards to look through.

I actually pulled the yellow Mountcastle while I was in Illinois with Andrew.

He has some nice Bowman cards, so I was glad to get these signed.  The purple parallel turned out really nice. 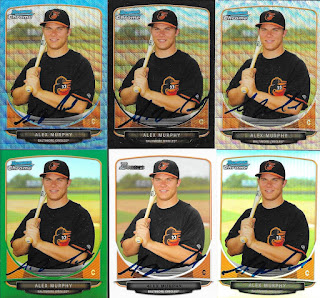 I had a nice little mini PC of Alex Murphy that I started right when he was drafted.  The cards were in a box under my guest bed, so I went ahead and put everything in my graphing bag for this week.  I got everything signed, and am really happy with the results.  The green chrome is numbered 21/75; the silver wave is numbered 17/25 (and I remember it being from an early Instagram trade), while the rest of them are not numbered. 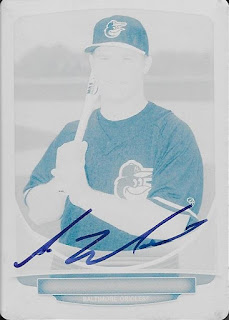 Finally, I used to not like seeing 1/1 cards signed, but since I spent the rest of the Murphy PC on graphing, it was only right that the printing plate end up in my album with the rest of its cousins.  It actually turned out really nice, and I am glad I got it signed. 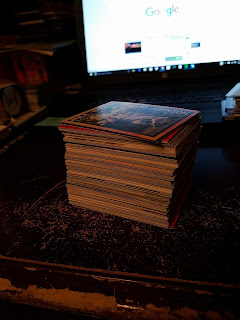 Here is the stack of cards that Chris, Jacob and I got signed.  We got 129 cards signed, one photo each for the boys and I printed out a photo of Grainger Stadium and got 6 Wood Ducks on that. 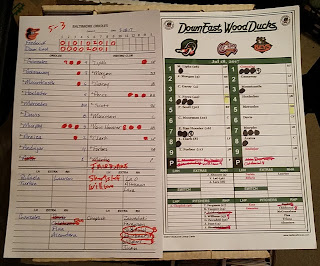 During the final game of the series, Brett Martin pitched for the Wood Ducks.  He looked good out there, and is still working his way back to form from his back injury.  He took a hard-luck loss, with a few runs scoring on some fluke hits.  I think only two balls hit off of him were really squared up.  I made sure to ask each manager prior to the game for the lineup cards, and they both came through.  I think I will frame these and hang them up, instead of taking them to the games for signatures.

So, We all had a great time at the games, and my nephew has put together a graphing book that he can take with him to Winston-Salem Dash games.  I hope he sticks with it, because he seemed to really enjoy himself, and the stack of autos he is taking home with him.

I'd like to thank my friend, Neil, for the tickets to each game, as well.  The seats were great and we had an awesome time.
Posted by William Regenthal at 9:41 PM