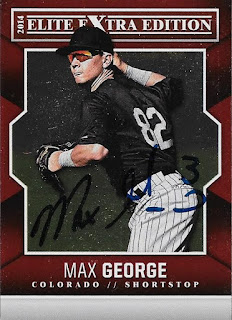 I wanted to get a game in this weekend while I was transporting Chris to my parents for his visit with them.  So, he and I checked out the schedule and decided to try to get Riley Pint with the Asheville Tourists.  I ended up finding some more guys from the team and had enough time to get in some 50/50s from Gerard.

I was able to get two Max George cards signed.  We couldn't get him inside the stadium as he was one of the last players to come out on the field and the coach had run Chris and I off (apparently, the players can't sign by the dugout...?).  We ended up getting George at the team bus. 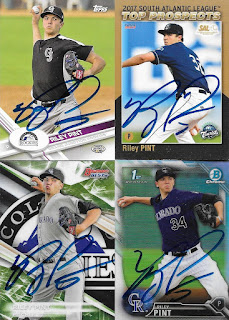 I was really happy to get Pint.  I had wanted to follow his career, so I had picked up a few of his cards.  I was really worried, though, as I couldn't find the cards I had picked up until a couple hours before the game.  I also found a Pro Debut in a pack of cards that I got at the card shop in Winston-Salem.  Pint was really nice, and signed everything that Chris and I had. 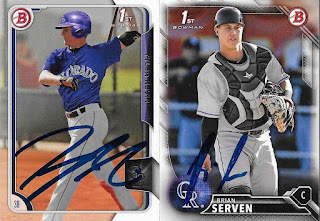 We also got Tyler Nevin and Brian Serven,  I found Serven at the LCS, and Nevin I found through my last pass through my Bowman box before I left town. 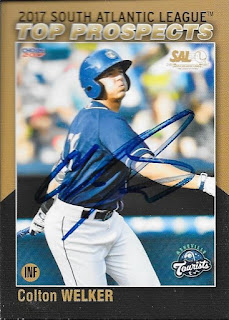 Finally, I got Colton Welker at the team bus.  Welker was the last guy that I needed, and I really wanted to get this South Atlantic League Top Prospects card signed.  Chris was ready to leave but we saw some players coming out, so we decided to wait out traffic and ended up getting Welker and George.

Chris got two baseballs during the trip, and kept telling me how much fun he was having.  I'm glad, because I'll miss him while I am on my trip.
Posted by William Regenthal at 7:54 PM