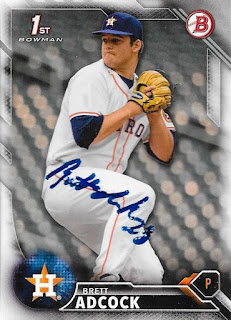 It has been a marathon weekend of graphing for me.  I wasn't going to go yesterday, but I ended up in Kinston, anyway, since my good friend, Gerard, wanted one of the Bill Ellis bobble heads that they were giving away.  I also finished up all of the Buies Creek Astros that I had, as well as several more Wood Ducks. 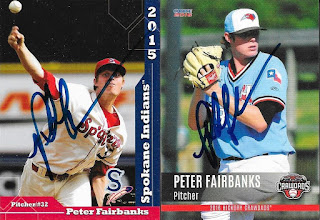 I finally got Peter Fairbanks on a couple cards.  He has been just as tough as Lipka, and also wasn't all that friendly.  I saw him shaking his head as he walked over, then he was really short with me while I was chatting with him.  I'm ok with it, but I just hope that he isn't that way with Chris when he gets back, because Chris really likes him.  Maybe he was just having a had day, so I'll chalk it up to that. 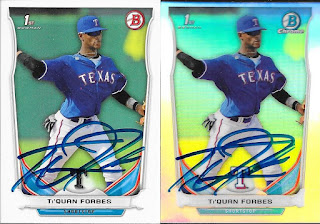 I finished off all of the Ti'quan Forbes cards that I had.  He's really nice, and seems to be enjoying his promotion to Kinston. 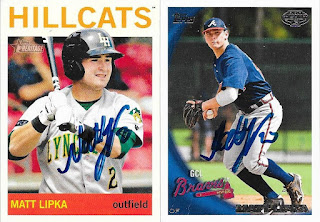 I finally finished all of the Matt Lipka cards that I had, which was nice.  He actually stopped pre-game two days in a row, so maybe not that his bat is heating up, he will be more willing to sign for fans. 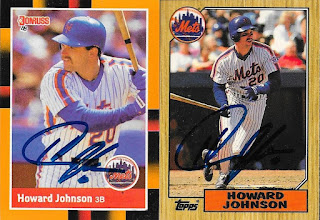 Finally, I got two more specialty Howard Johnsons signed.  The left card is a 1988 Donruss Baseball's Best, and the right is a 1987 Topps Tiffany.  I still have Johnsons to get signed, but I am done with everything I have bought special.

I now can take a week off from graphing and can kind of reset.  It has been a busy week, but enjoyable.  I am also ready for Chris to get back.
Posted by William Regenthal at 11:41 PM