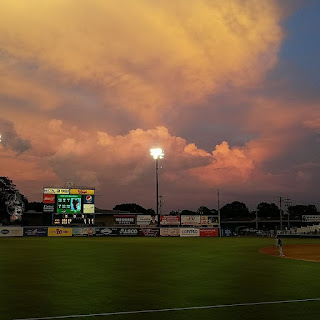 The Wood Ducks returned home tonight from a successful 3-game road trip where they won a series against the Winston-Salem Dash.  They carried that momentum into tonight's game and beat the Buies Creek Astros 7-1.  I had a great time tonight, as it was a return home for me, as well.  My last graphing experience didn't go as well as I had hoped, so a return to the friendly confines of Grainger Stadium was welcome.

I took this photo tonight and it was featured during the weather on WITN's 11:00 PM newscast.  I was really excited about that. 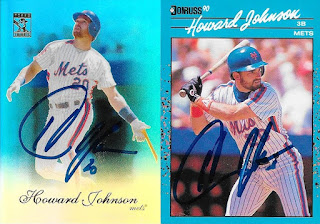 I have only been placing two cards of Howard Johnson in my autograph book, now, since he has pretty much been doing two-per at each game.  I have a couple nice cards, still, that I would like to get signed, so I hope I can get them during the next few games.  That way, I can finish the 50/50 from Gerard, and wrap up the season without too many cards left over. 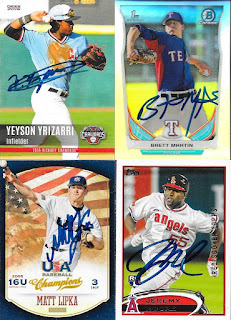 I came home with one each of newcomer Yeyson (pronounced Jason) Yrizarri, Brett Martin, Jeremy Moore and Matt Lipka.  Lipka actually signed two, but one is for Gerard.  I was really happy that Lipka signed for me pre-game.  I hope I can get the last two cards of him taken care of.  His bat is coming to life, so maybe that has helped his demeanor.  Not that he was mean or anything, maybe he just doesn't like to sign.  That's fair enough.  I had a lengthy conversation with Brett Martin, which is always enjoyable.  I also spoke with Jeremy Moore twice.  He specifically asked about Chris, which was really cool.  Chris is on a trip, so when he gets back, we will have to make a point to go to Kinston so he can say hello to all of these guys. 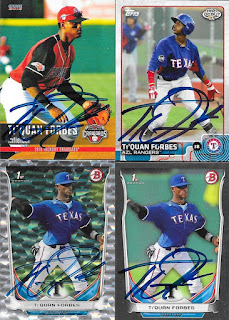 Speaking of newcomers to the team, Ti-quan Forbes was recently promoted to the Wood Ducks.  I had a bunch of cards of him, so I went ahead and got the best of the bunch taken care of.  With him and Yrizarri, I knocked two more cards off of my Hickory set.  That was really nice.  I could have gotten a third, but I have yet to be able to get Peter Fairbanks.  I am kind of waiting for Chris to come back, since he told Fairbanks that he is his new favorite player.  I can always wait til after the game outside to get those cards taken care of. 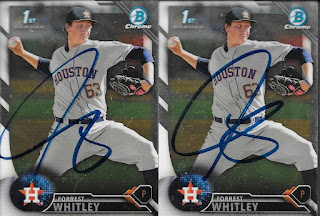 Another newcomer to the Carolina League is Astros prospect, Forrest Whitley.  He signed two of the four cards that I had.  I will try Buies Creek at least one more time, so I think I can get the rest taken care of. 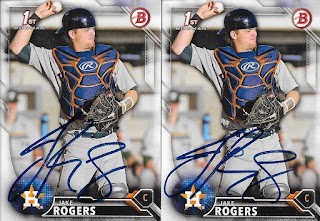 I went to the card shop while on my lunch today, and along with the Whitleys, I also picked up two Jake Rogers.  He was really nice, and signed both cards. 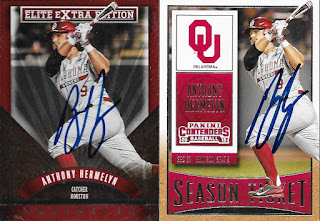 I also picked up these two Anthony Hermelyn cards that turned out really nice. 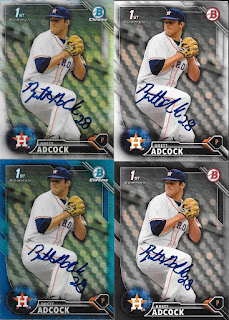 Finally, I had gotten a couple Brett Adcock cards from the shop, and also from an order on COMC.  I have a couple left over, but these were the best of the bunch.  That blue parallel really looks nice.

I felt so much better following this game, as opposed to the Salem Red Sox game.  I think it was a return to the field I am familiar with (graphing, at least) that helped.  Also, it was Food Truck Friday, and the food was amazing.  Maybe that was it.
Posted by William Regenthal at 12:22 AM