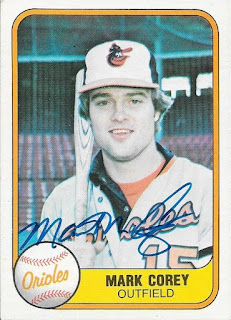 After this post, I have two TTMs on my desk that need to be blogged.  I haven't sent many out this month, mainly because I have been graphing a ton in person at Wood Ducks games, and have also been busy during the week.  I haven't had a lot of time to sit down and write the necessary letters to players.  I hope to get a few out in the next week or so, just to get the clock ticking on some of them while I am off doing the various events I have planned for this month.

This TTM success from Mark Corey helped me add a former Oriole to my binder.  I also was able to add a 1981 Fleer out of a stack that my amazing friend, Max, sent to me. 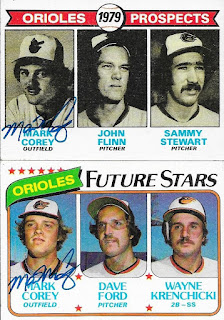 I also thought it was interesting that Corey had two Topps Prospects cards.  I don't think I will be going after the other guys, though.