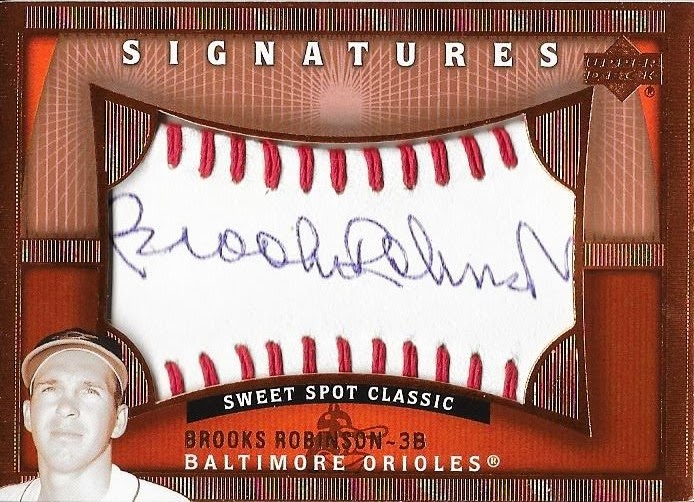 I did a deal on Instagram recently where I landed this awesome 2005 UD Sweet Spot Classic Brooks Robinson autograph for $30, shipped.  The card is amazing.  I can't believe I haven't picked up one of these before now.  I felt like the $30 was a fair deal for the card (it also included shipping).

Before that moment, I had a pretty low opinion of trading on Instagram, and I'll explain why before I get into discussing how this particular deal was struck.  Instagram is almost like the wild west.  Everyone running around buying/selling/trading cards with some bad apples thrown in.  Most of the sellers/traders are kids and the age range is somewhere betwee 11-14.  I had made a trade on there where I gave up one signed baseball for another, but in the end, I never received my end of the deal.  The 12-year old kid (named Joe) kept my ball and said that the one he sent me was 'lost in the mail.'  When I asked him to send me my ball back, he said he did, but then could never produce a tracking number, so I knew then and there that I was scammed.  Well, I've blasted that kid's handle all over Instagram (king_cards15), so hopefully no one trades with him anymore.

So, as I was just about to end my trading days on there just as they began, I met Kyle.

Kyle (who is 14) had a picture of this Brooks up and I asked him about it.  When he told me the price, I felt like it was a good deal, so I decided to try again in making a deal on there.  I got to talking to Kyle quite a bit and decided to also send him a few Roy Halladay cards for good measure as well.

So, this card came in yesterday and I was really happy.  I subscribed to Kyle's Youtube channel (MrPhilliesphan04) as well, just in case he posts any stuff on there for sale or trade that I might like.  If any of you has an Instagram, you should follow him, he's a really good guy (sportscardsgalore) or go follow his Youtube.

Thanks for the deal, Kyle!  I know we'll be doing some more.
Posted by William Regenthal at 5:07 PM