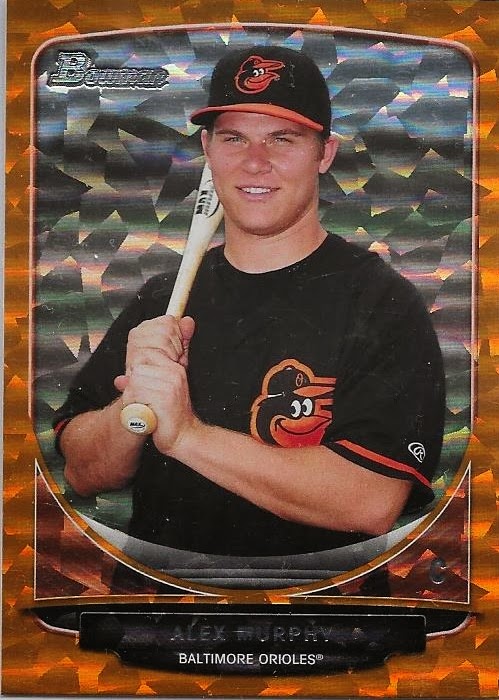 I got a really cool card off of Ebay last week when I won an auction for this Alex Murphy card.  It is a 2013 Bowman Orange Ice parallel, numbered 4/5.  I've seen cards numbered to 5 for certain players go for hundreds of dollars, but this Murphy cost me only $16, including shipping.  Not bad, right?

It came in a Beckett top loader, labeled Beckett Raw Card Review, 9.  I guess it would qualify for a grade of 9 if I chose to send it in.  I won't, but it is nice to know.

I'm really hoping that Murphy breaks out and becomes a star.  Not that I ever invest in cards, but for $16, I think if he becomes a star, I'll make a good return on it, haha.

Really, though, I like the Orange Ice parallel.  I had no idea they existed until I was looking up Hunter Harvey cards on Ebay and saw them.  They really are nice and they go so well with Orioles.
Posted by William Regenthal at 10:17 PM