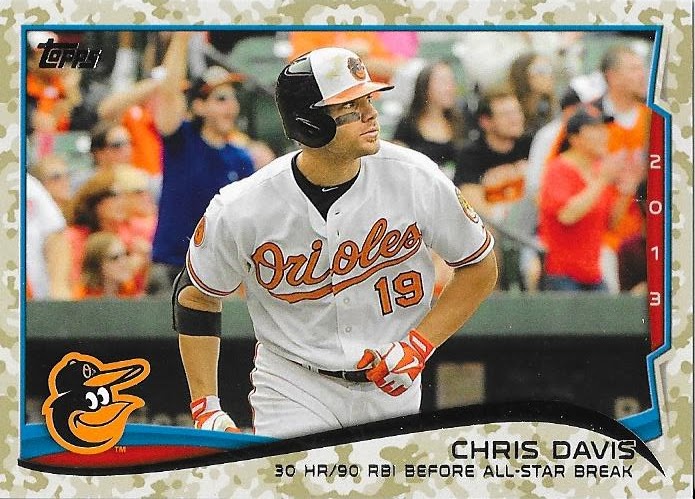 Here's another Chris Davis parallel from 2014 Topps.  This time, we have a camo parallel that is numbered 75/99.  The camos look just a little different than last year.  I believe they are a touch greener than last year's desert camo.  I could be wrong, maybe I just need to clean my glasses.

Spring Training is upon us now as we prepare for the 2014 season.  The Orioles held off on signing a mediocre pitcher just for the sake of making a move.  I had hoped they would add an innings eater to the rotation to give Kevin Gausman a little more time in the minors, but I trust in Duquette and Buck, so we'll see how the season goes.  I'm tempering my enthusiasm, but I shall remain optimistic.  We will see.

I just hope the O's extend Davis.  I'm really scared that he and his 'super' agent will walk and the O's will be without one of my favorite players.  Uggh.  I'm so over the dark ages of O's history.  Time for them to remain relevant for longer than one season.  Come on guys, get Davis locked up.

Posted by William Regenthal at 5:16 PM