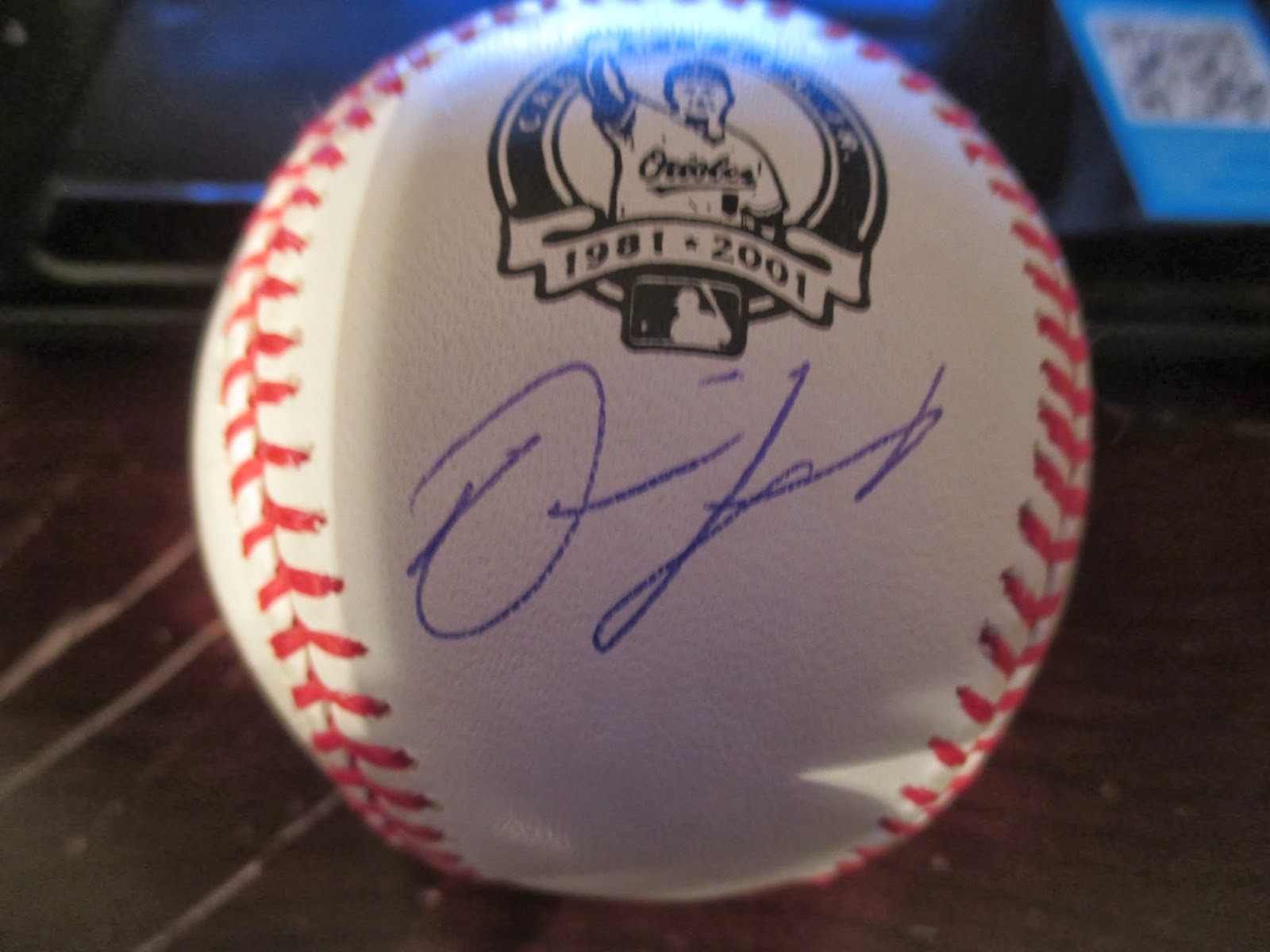 Before I kick off my showcase of autographs, I do want to say that I got a dozen OMLB "Cal Ripken's Final Game" baseballs to take with me to Fan Fest to get signed.  The box of 12 was $50 cheaper than a normal box of OMLB baseballs.  You can see the logo on the above baseball signed by one of the newest Orioles, David Lough.  As far as I know, his last name is pronounced to rhyme with dough.  He seemed like a really nice guy.  My son, Chris, welcomed him to the team and told him the he would like him because he is taking over for Nate McLouth and McLouth was one of Chris's favorite players.  Lough smiled and signed Chris's baseball and was equally as nice to me when I told him "Welcome to Baltimore."

From everything I hear, Lough is going to be a solid addition to the team.  I really hope that's the case, because I really liked McLouth.  I believe that Lough is going to be a similar type player, except with him you add batting average and subtract stolen bases.  I'm ok with that.  The Os got Lough in a trade with the Royals for Danny Valencia. 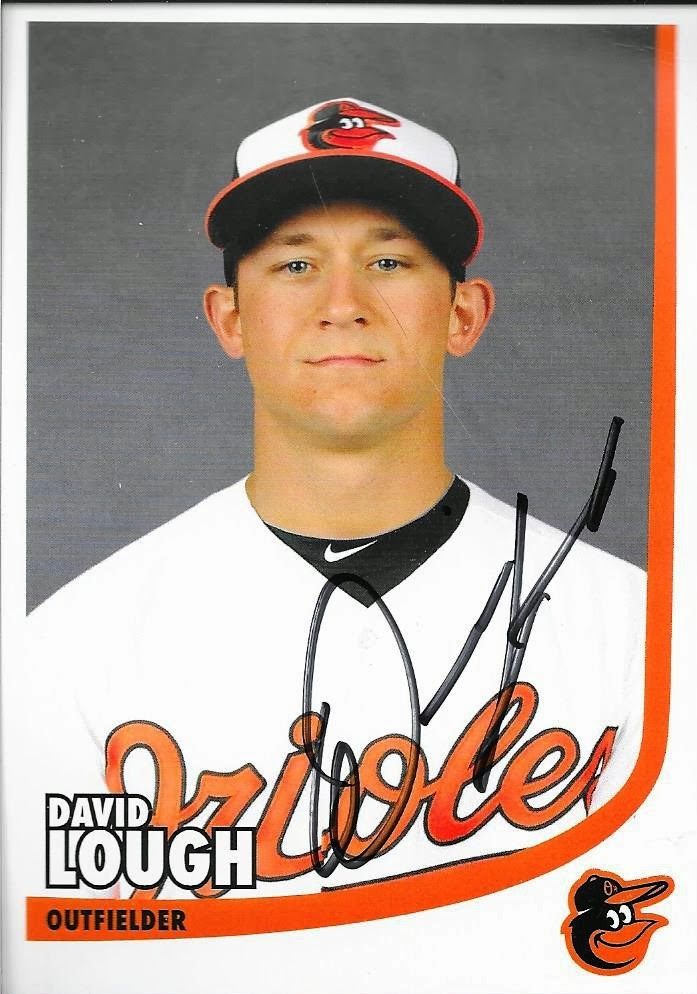 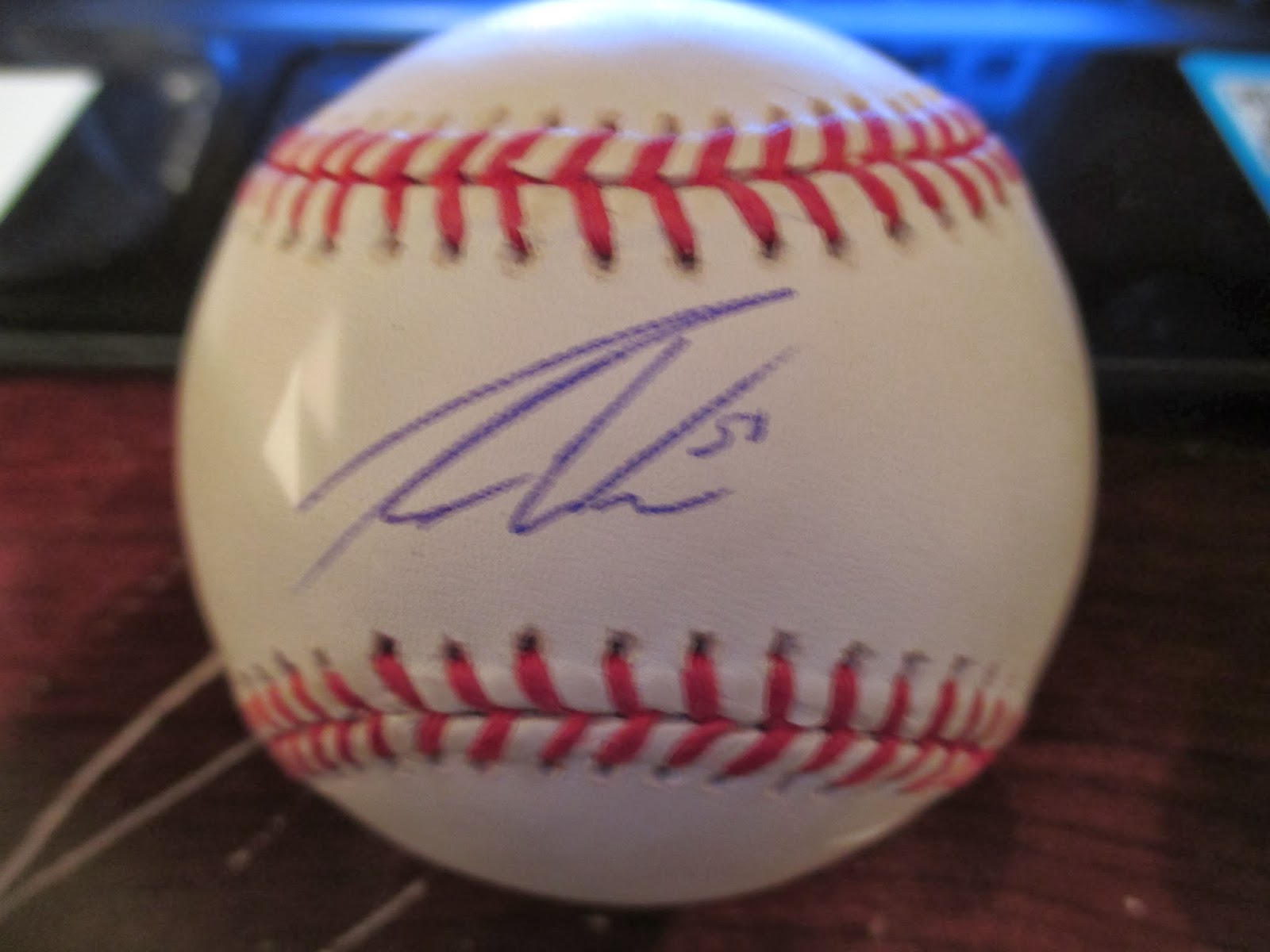 The next baseball (above) is signed by another newcomer to Baltimore, Ryan Webb.  Webb came to the Orioles as a free agent (and he passed his physical, gasp!) from the Marlins.  He's a really effective ground ball pitcher who should fit into the bullpen nicely.  He didn't really replace Jim Johnson, but he has similar makeup and is several years younger (and much cheaper). 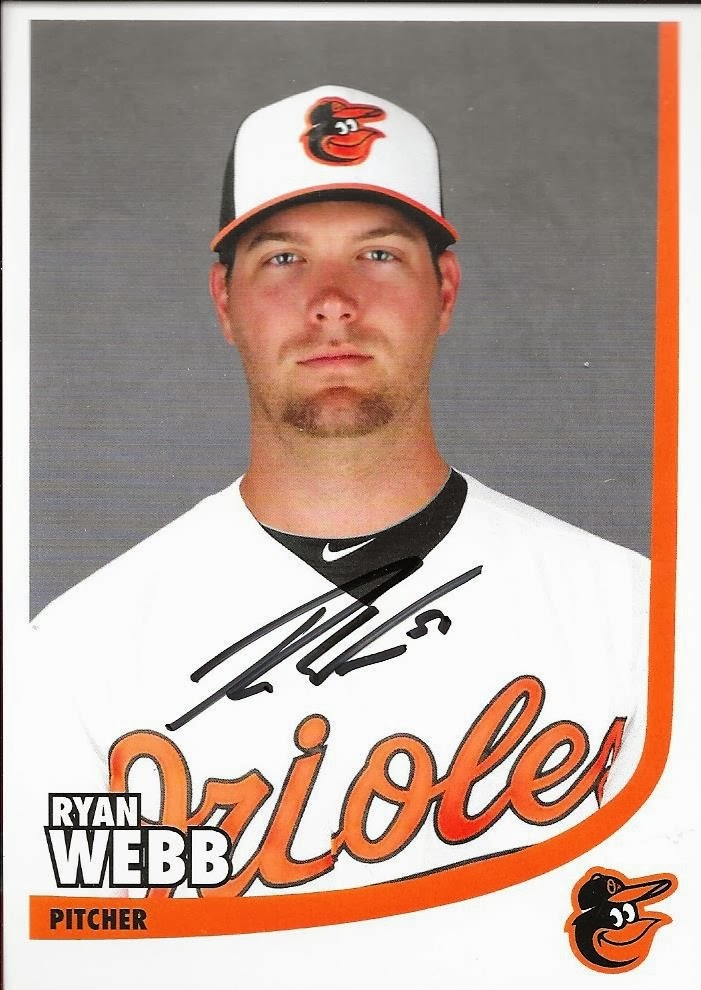 Webb was very outspoken on the Twitter by criticizing Alex Rodriguez when A-Roid announced he was suing the Player's Association.  When it was my turn to get an autograph from Webb, I asked him to please put one in A-Roids ribs when he comes back.  Webb just smiled and said "He isn't coming back."  Well put, sir.  I think I'm really going to like him in the late innings. 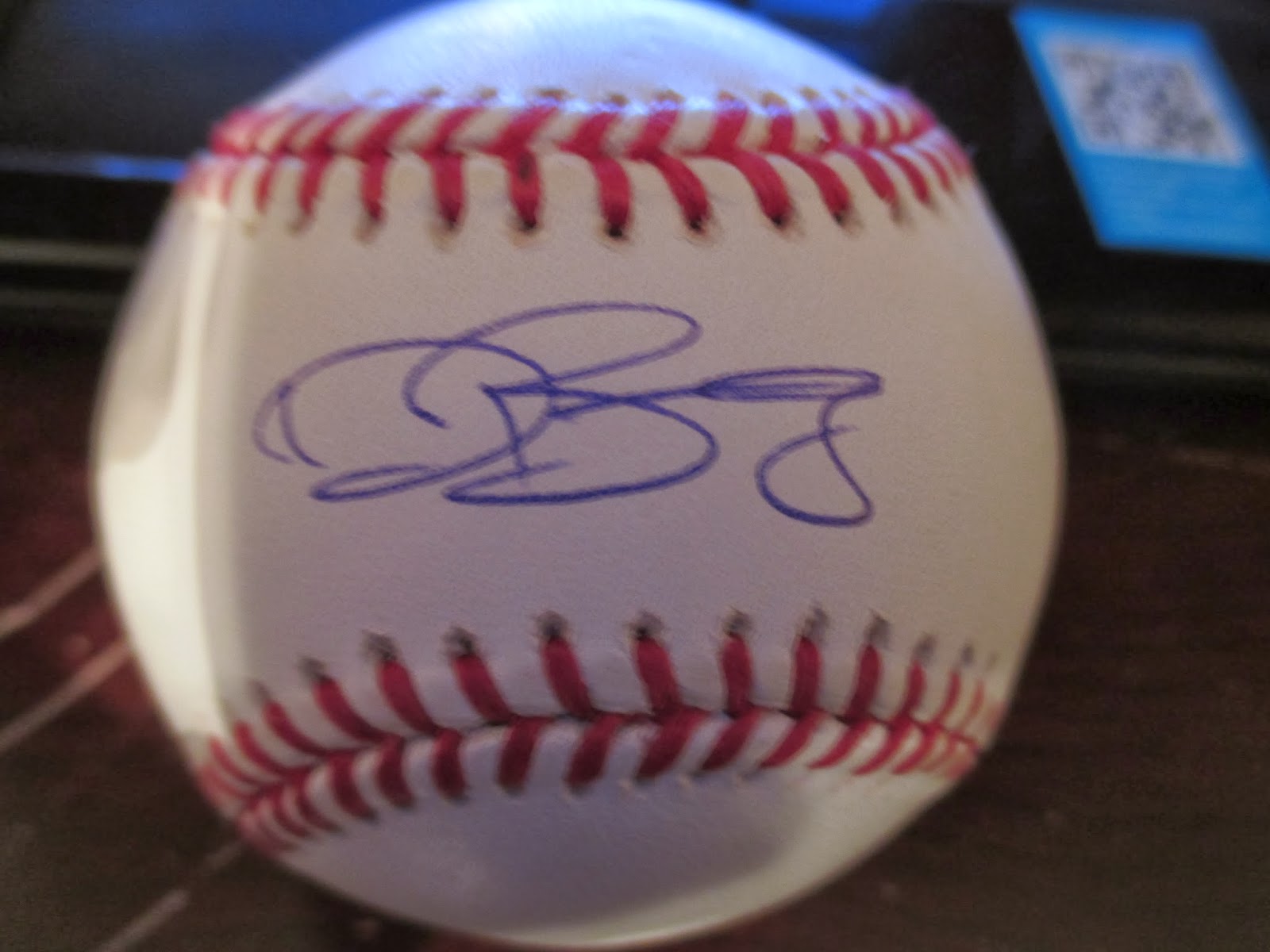 Finally, I got another signed (my third) baseball of Dylan Bundy.  Bundy is on the mend at the moment from obligatory Tommy John surgery.  He looks to come back after the All Star break, if not sooner.  I wouldn't rush him at all.  I'm really scared that he is going to end up like Mark Prior, but I hope he doesn't because it has been forever since the Orioles drafted and developed a solid MLB pitcher.  We'll see what the future holds. 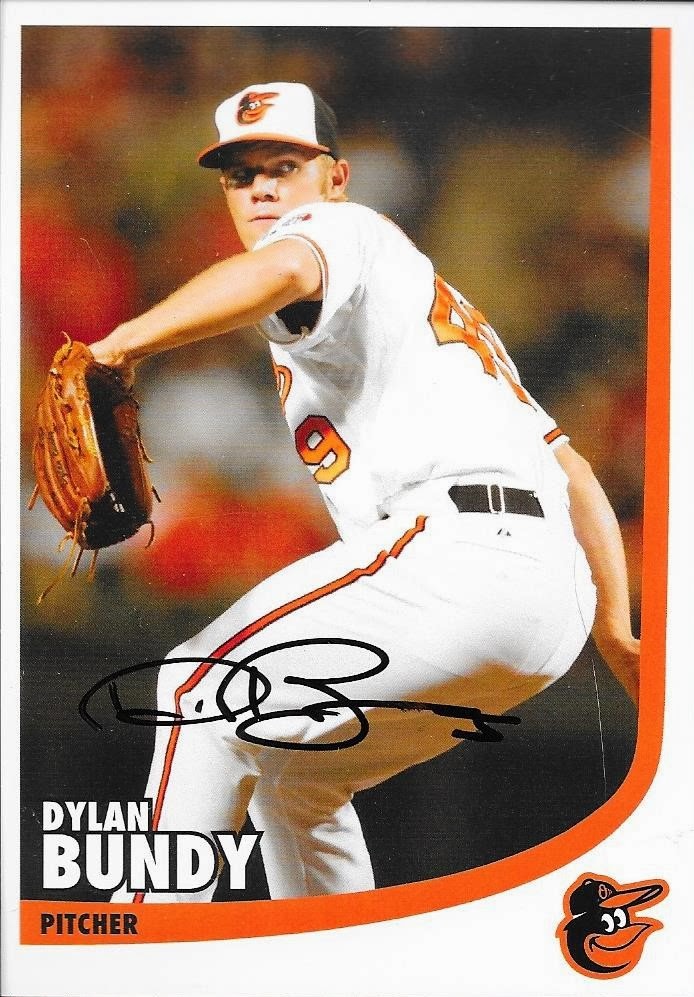 The first autograph session was at 11:20AM and my next one wasn't until 4:40, so I had a ton of time to kill. Check back to see when Scott and I picked up in the memorabilia store while we waited.
Posted by William Regenthal at 8:30 PM