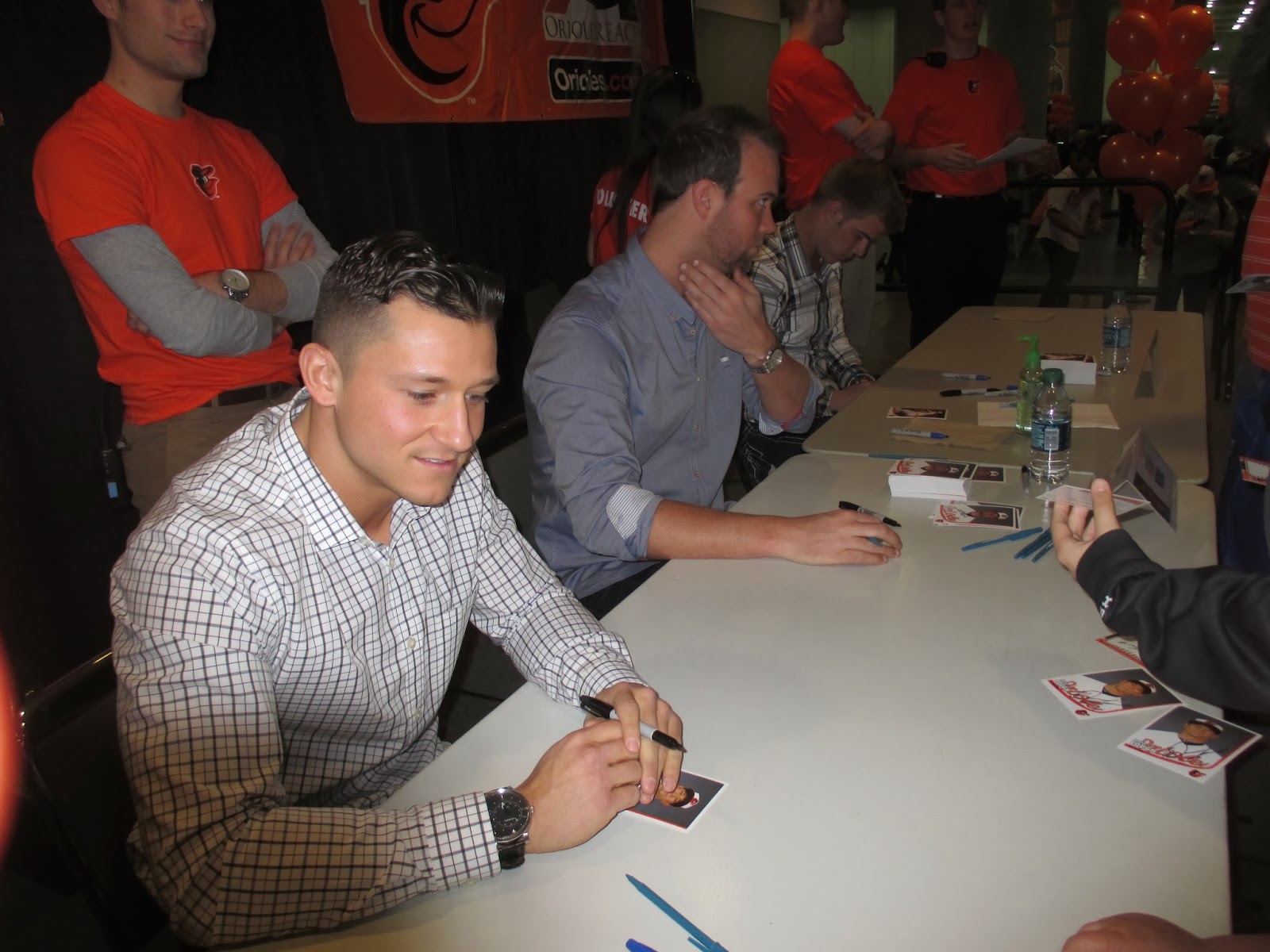 Yesterday, I spent the day with my son and my good friend, Scott (from the blog Mr. Baseball-Scott) at the 2014 Orioles Fan Fest.  Originally, I was pretty upset that I was unable to get as many autograph vouchers as I had liked, but in the end, I did really well.  The above photo is of our first autograph session, David Lough, Ryan Webb and Dylan Bundy.  We also had vouchers for later in the day to the Bigbie/Urrutia/Wieters/De La Cruz signing.

The crowd wasn't quite as large as last year, but 15,000 fans still crowded into the Baltimore Convention Center 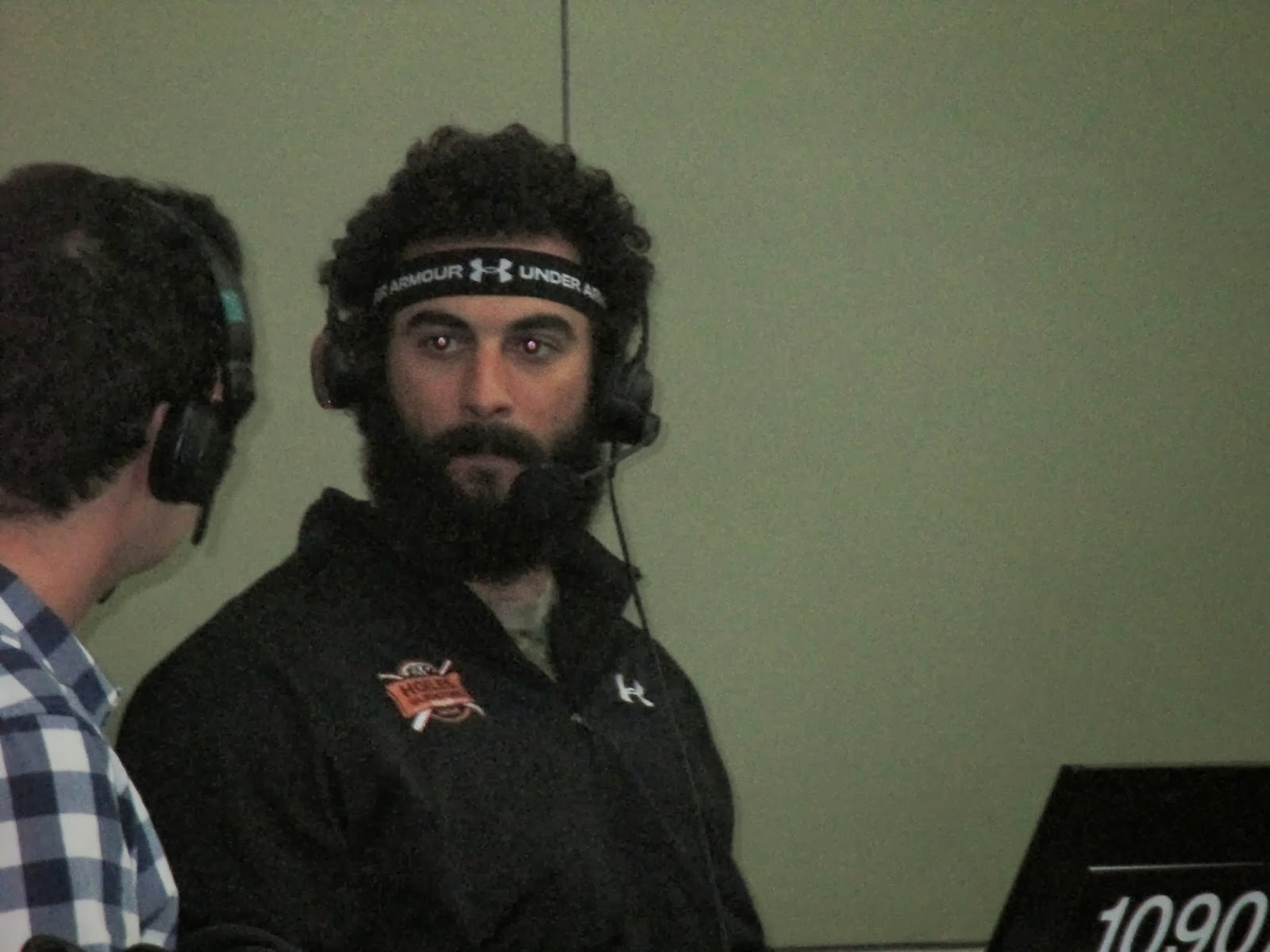 Nick Markakis brought his beard with him.  He looks like a young Chong, from Cheech and Chong. 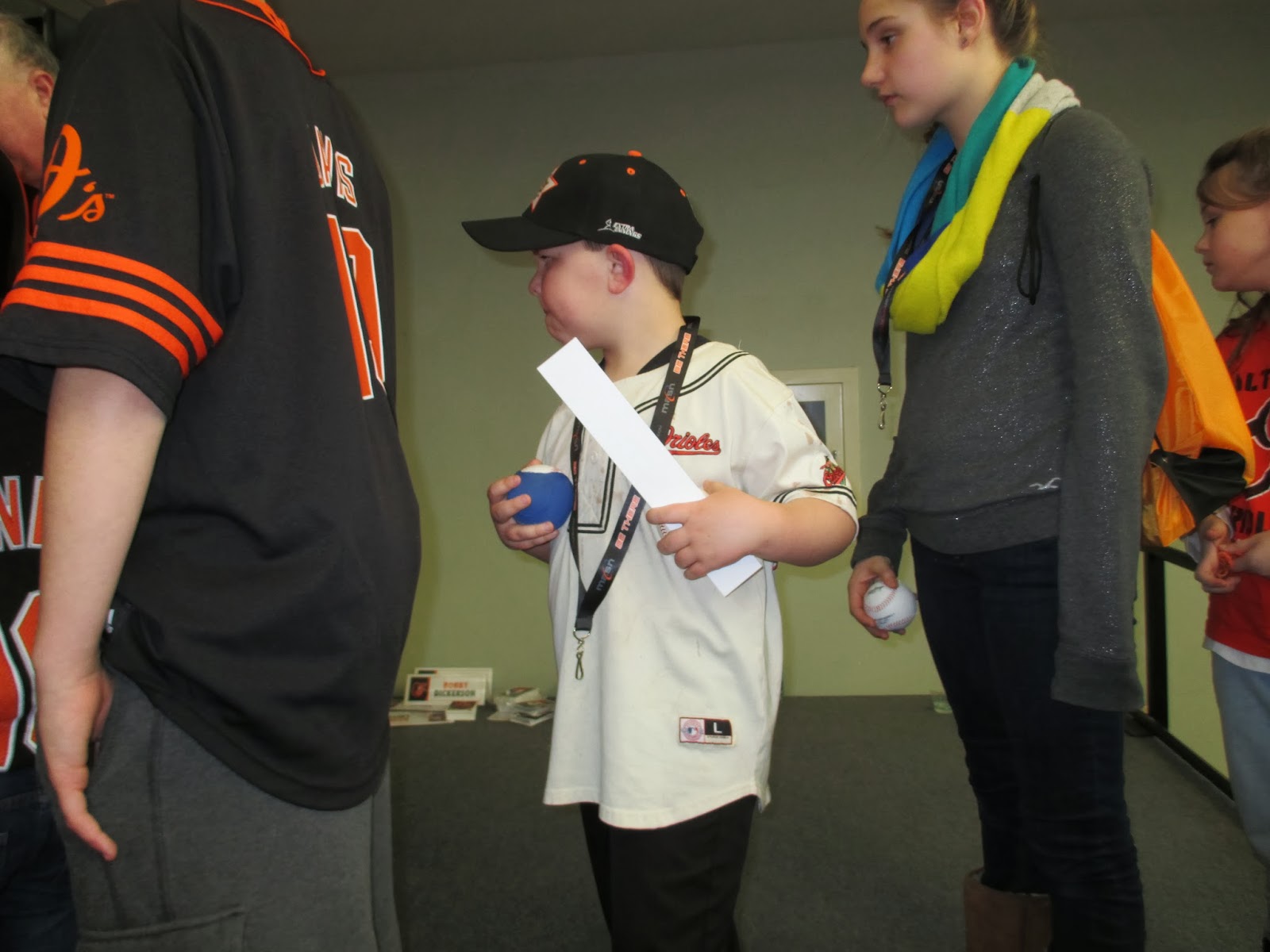 Chris was recruited by my buddy, Michael to get him some autographs from the kids line. 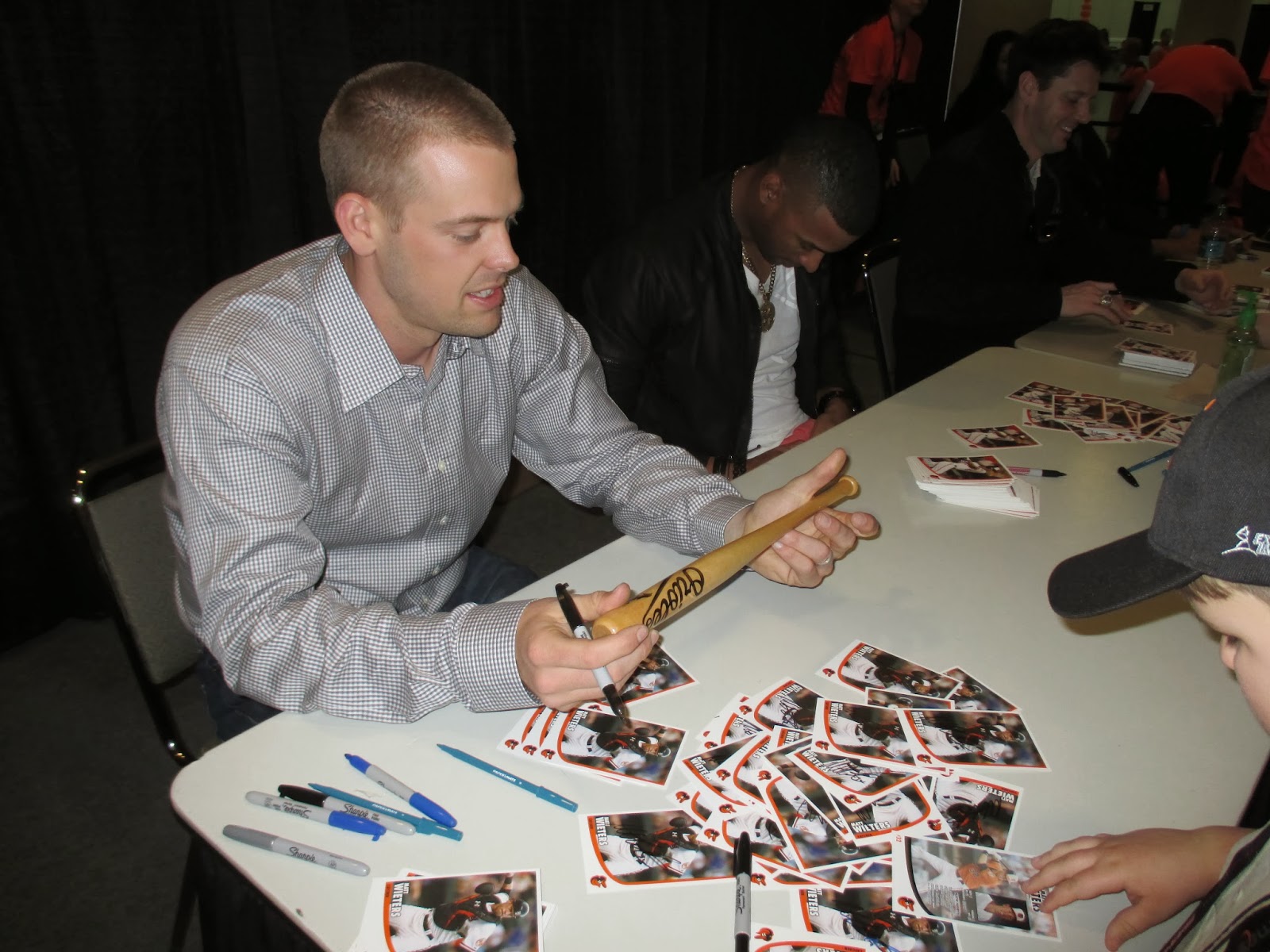 Chris enjoyed meeting Matt Wieters for the third time.  He first met him in 2008 when Wieters was with the Keys, then again in 2009 when Wieters and Tillman were signing autographs with the Baysox. 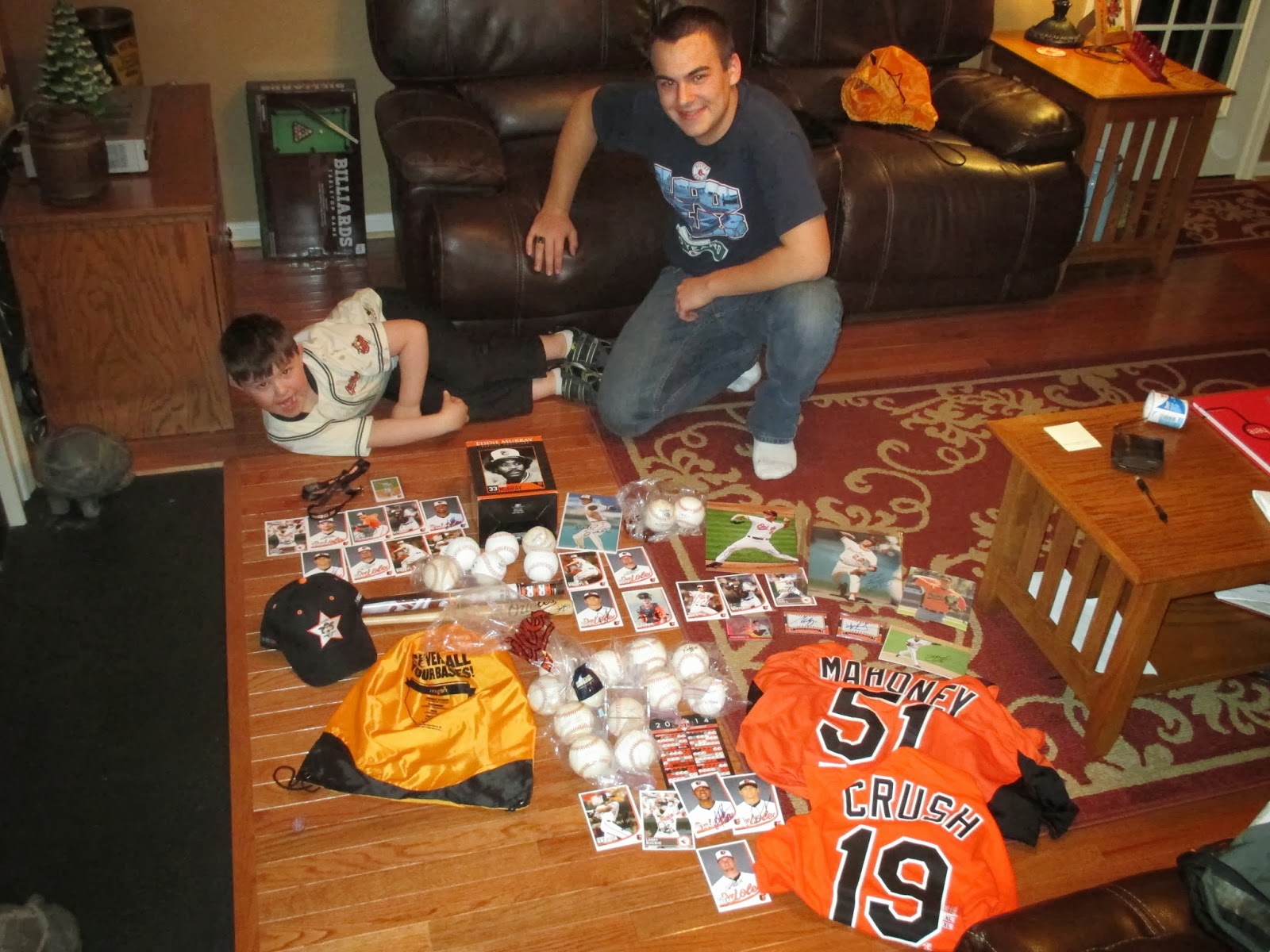 So, here are Chris and Scott posting with our total haul.  Between the three of us, we got 24 signed baseballs, 21 signed post cards, 3 MASN bags, an Eddie Murray statue, a Chris Davis shirt, a Joe Mahoney Spring Training jersey, a Keys hat, 6 signed photos and 6 game used baseballs.

I doubt I'll post about each and every item, but I do intend to break out a few posts on certain items, so stay tuned.  In the meantime, I would like to thank Scott and his family for a great time and them being such amazing hosts.  I really appreciated our time together.
Posted by William Regenthal at 6:08 PM