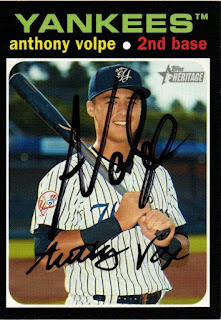 The term "card dump" might sound like it has a negative connotation, but I assure you it is only used as a description of what I felt I had to do with these cards, since my stack got mixed up a while back.  I had no idea who sent me these, and I imagine some of them will come forward at some point and let me know that they sent these to me.  Anyway, the cards that went unaccounted for, so to speak, were some decent ones.  I mean, I really should have known who sent me this Anthony Volpe.  I thought it was my friend, Patrick, but I was mistaken.  Still, it is a great autograph, and Volpe stuff is hot right now. 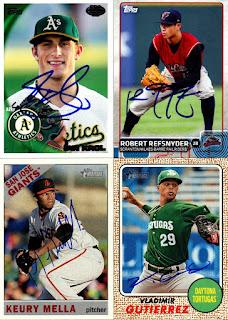 I do know that these four cards came from an early 50/50, because of the labels on the back.  I originally used to use those tape tabs, but I have since switched to small post it tabs.  I remember tryig to get Ian Krol when he was with some team I was set to see, but missed him.  I wish I could remember who I sent these to.  They all turned out great. 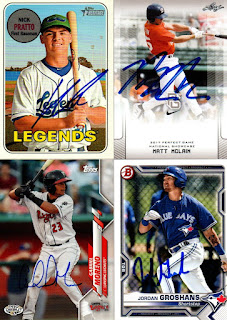 These were in random penny sleeves and/or top loaders, so I think these came in various trades.  I feel like the Groshans and possibly the Gabriel Moreno were from a trade I did with someone for a signed 1986 Topps that they needed.  I probably should log this stuff better.  Anyway, these all are pretty cool, as well, and are now finally in my album.

Thank you so much for all of the trades and 50/50s the past couple of years.  That stack has now been taken care of and I can start fresh with some of the 2022 stuff that is still set to arrive now that the milb season is over.  I also misspoke earlier when I said I was almost caught up.  I have a few birthday items that I want to get posted, so those will be falling in line, as well.

Posted by William Regenthal at 11:37 AM