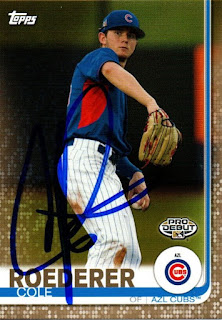 This season's 50/50 returns are coming back in, and I am pretty happy with what I was able to get signed this year.  When I went on my road trip in July, I made contact with some folks ahead of time to find out about graphing habits at some of the ballparks I was scheduled to go to.  One of the folks I had reached out to was a guy named Isaac, who graphed the Tennessee Smokies.  He wasn't able to meet up at the game, but was willing to take the stuff that I missed out on while we were there and get some of those cards signed.  One of the cards I really wanted back was the above 2019 Topps Pro Debut Cole Roederer.  He skipped over this card when we saw him in person.  No issues, though, Isaac took care of me. 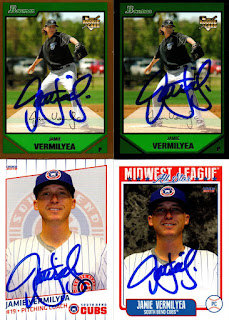 I missed Jamie Vermilyea completely when we were there, so I was glad to get all of the cards of him that I had pulled signed.  I have a ton of 2007 Bowman, and I really didn't want to have to put those back in the box.  Isaac also helped me with the team set cards, so getting them done was nice, as well.

I also missed Riley Thompson completely, but Isaac came in behind me and got these knocked out. 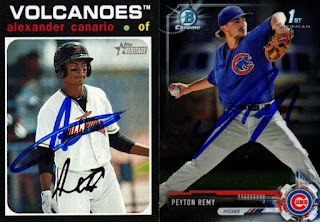 I don't think I saw Alexander Canario when I was there, but Isaac got this 2020 Heritage Minors done.  I know I saw Peyton Remy when he was with Myrtle Beach, but getting this 2017 Bowman Chrome signed was still nice. 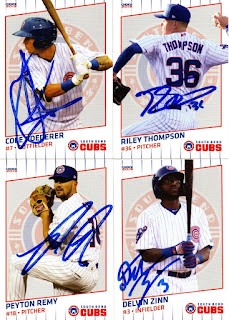 Finally, here are some of the other team set cards that I missed.  I was glad to not have to put these back with the set, and can add them to my album.  I don't know if I will be able to complete the set, but I know I have a few cards knocked out already.  I can try again necxt season, depending on where the guys I'm still missing are assigned.

Thank you so much for taking these cards for me, Isaac.  I'll have to get up with you again next season and get some more cards out of my boxes.