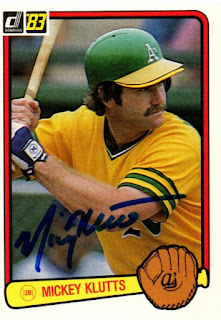 Some early 80s cards came back signed in this TTM success from Mickey Klutts.  The cards turned out great, even if the cards themselves aren't all that inspiring.  Still, the old A's uniforms look awesome on the cards, like the above 1983 Donruss.  I have so many 83 Donruss, it was nice to get one into the album. 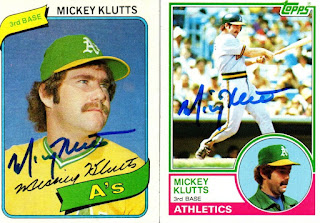 I mailed to Klutts on October 1 and got the cards back on October 20, for a 19-day TAT.

Posted by William Regenthal at 5:55 PM