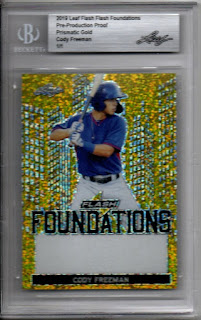 Another birthday has come and gone.  This one wasn't very eventful, which is what I wanted.  I took the day (was a Wednesday) and then the following Thursday and Friday off.  I was going to try to travel to a game, but ended up staying around the house since we were down a car.  I used the time to organize my card room a little better and also to scan a bunch of cards (hence all of the posts).
Meanwhile, I got a couple birthday packages in; this one is from my buddy, Gerard. 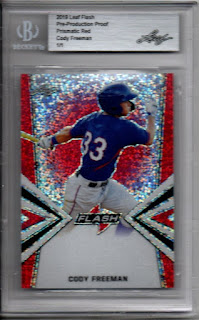 Gerard sent me some autographs of current and former Wood Ducks.  Those have been put away for now.  At some point, I want to put an album together of those kinds of cards, but in the meantime, they are in a box labeled "Wood Ducks".  I'll probably buy an album and box of pages specifically for certified autos of current and former Wood Ducks and just fill it randomly as cards come in.  That's an idea, at least.

Gerard also sent me these cool graded proof cards of Cody Freeman for the PC.  I think these are really awesome, and are pretty unique for me.

Thank you so much for the gifts, Gerard.  I really appreciate it.

Posted by William Regenthal at 5:28 PM