I'll just let you all sit here for a moment and appreciate the sophomoric humor that I found in the headline on this card.......... 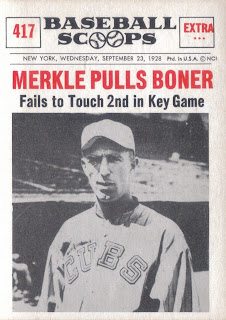 Ok, my sense of humor, which is perpetually 14-years old still has me giggling at this card.  If one is offended at this, well, all I can say is, sorry.  The card makes me laugh.  Also, I'm sure I'll get at least one email about it being inappropriate and what not.  Oh well, it's my blog. 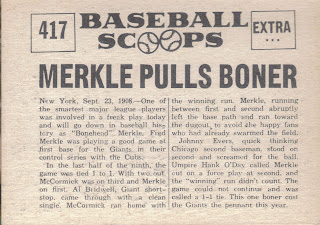 Anyway, Cubs fans can look at this card and rejoice at Merkle's 'Boner' (as it was called way back in 1908 when that word meant something entirely different that it does today) and sent the Cubs on their way to winning the NL pennant and eventually the World Series.  Click on the picture of the reverse of the card to get a better explanation of Merkle's blunder than I can ever come up with.  To summarize, he hit a ball in the final inning of the game with the game tied 1-1.  The guy on third scored, so instead of touching second base, Merkle turned around and ran toward the dugout.  A Cubs player took note, screamed for the ball and touched second, ruling Merkle out and causing the winning run to not count and the game ended as a 1-1 tie because it could not be continued as fans had stormed the field, thinking the Giants has won.  It sounds an awful lot like an infield fly called in the outfield to me...  The teams were neck and neck for the NL pennant at that time late in the season and the Cubs ended up winning it by one game.

The 1961 Nu-Card Scoops set consists of 80 cards numbered from 401 to 480.  I'm not sure why, if someone wants to fill me in on that, please do.  This would be a really cool set to put together.  i picked up 3 more cards from this set that I will show soon.  I think I would consider putting it together at some point.  A few of the premium cards (Ruth and Gehrig, of course) run a little higher than the others.  I got this one the Sunday after Thanksgiving for $1.75, even though it books for $1.50.  It was the only one I saw, so I didn't mind paying a bit more.  One of those supply and demand things.

Anyway, I hope you all enjoyed this card as much as I did.  I really do think it is a cool one that I had no clue about until a few weeks ago.
Posted by William Regenthal at 10:54 AM

I always found the phrase "Merkle Boner" funny, but I, too, have the sense of humor of a 14-year-old. The only thing that could have made it better was if they would have refered to "2nd" in the headline as "Number Two."