The second baseball I got from Collect Auctions recently was of Hall of Fame manager Leo Durocher.  Durocher is my 80th hall of famer. 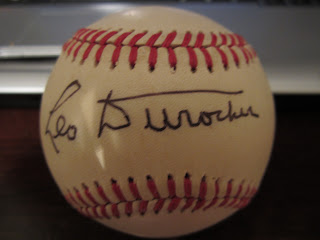 Durocher was elected to the Hall of Fame posthumously by the Veterans Committee in 1994.  When he retired he ranked 4th all-time in Wins (he was second to John McGraw in the NL).  His career managerial record was 2008-1709 (.540 winning percentage).

The 69 Cubs players hated him but he was quite a character. Great ball!