Something not uncommon, Jimmie Foxx's name is misspelled on the card.  He actually preferred it to be spelled 'Jimmie.'  This is the second of the two 1961 Golden Press cards that I picked up from COMC. 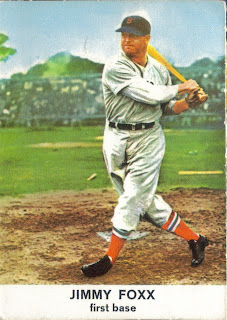 Foxx played in the majors for parts of 20 seasons and, yet, batted under .300 in only five of those seasons.  His highest batting average over the course of a full season was .364 in 1932, where he also hit 58 home runs, but did not win the batting title (he did, however, win the MVP award).  The batting title went to Dale Alexander that year, when he batted .367.
Posted by William Regenthal at 6:24 AM

I really like this set, I think they look amazing! I have picked up all the Giants from the set and have thought about going for the entire set one day. Nice pick up!