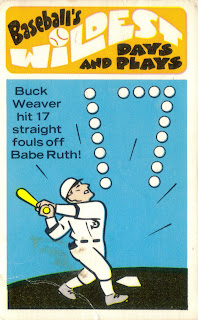 Something really cool that I got for Christmas was this 1973 Fleer Baseball's Wildest Days and Plays featuring Buck Weaver fouling off 17 pitches off of Babe Ruth.  You can click on the scan of the back of the card and read more about the play. 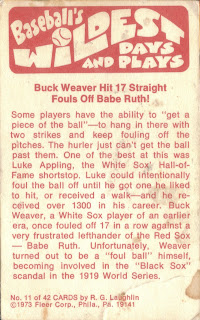 I got this card from my brother Philip, who is a regular reader of the blog.  He and I have been discussing the 1919 Chicago White Sox (a.k.a. The Black Sox) and how Shoeless Joe Jackson should be allowed entry into the Hall of Fame.  I also thought that in his brief career, Weaver was also a very good ball player who seemingly got a raw deal from then commissioner Kenesaw Mountain Landis.  Weaver apparently never took any money during the 'fix' of the 1919 World Series and his stats for the series (.324 batting average during the series) argue that he may have been playing 'on the level.'  Weaver might not have the career numbers that could warrant his inclusion into the hall, but had he been allowed to continue his career, that might be a different story.  He had 1,308 hits, 21 home runs and a ..272 batting average over 9 seasons, all for the White Sox.  He appealed his ban from baseball each year up until he died in 1956.
Posted by William Regenthal at 2:30 PM