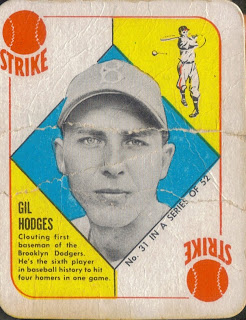 Hodges suffered a massive heart attack after playing golf with a few of his coaches on April 2, 1972.  He was among several former Dodger greats who were felled by tragedy early in life (Roy Campanella was confined to a wheelchair after a car accident and Jackie Robinson died of a heart attack a mere 6 months after Hodges died).

He appeared on 15 consecutive Hall of Fame ballots but never received more than 63% of the required 75% of votes to get in.  All signs point to Hodges getting enshrined sooner than later.  His numbers alone do not warrant inclusion, but if you also factor in the fact that he was the core of those legendary 1950s Dodger teams, I think that gives him the extra boost to get in.