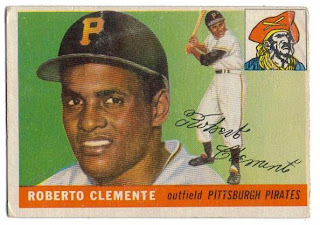 His close friend, Manny Sanguillen, was the only Pirates player who did not attend Clemente's funeral because he was diving in the waters where the plane had reportedly crashed in an attempt to find Clemente's body.  That's friendship, right there.  True friendship.

So, tonight, as the curtain closes on another year, I am glad to shine a light on a true baseball legend and a great man.  Rest in peace, Roberto.
Posted by William Regenthal at 5:54 PM

Nice post dude, gotta love Clemente. One of my all time favorites.