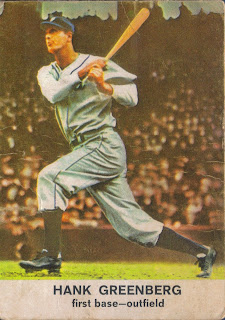 As you all know, I'm a huge fan of the Hall of Fame.  Many of the older Hall of Famers are interesting to me.  One player in particular, Hank Greenberg, is probably right up there with Jimmie Foxx to me.  Greenberg was a monster in his day, much like Foxx.  Greenberg played from 1930, 1933 to 1941 and 1945 to 1947 for the Tigers and Pirates.  He mentored Ralph Kiner during his last season, which was spent in Pittsburgh.

The 1961 Golden Press set consists of 33 cards that originally came in a booklet.  They were perforated to easy removal.  I looked closely at my card and, yes, you can see where it had been attached to its respective booklet.  At 33 cards, this might be another easy vintage set to put together.  I might have to make a note of it and see what I can do.  I got this card off of COMC the Sunday after Thanksgiving and paid $2.13 to a BV of $5.00.  Not too bad.  The card has a little creasing on the front and some scuffing on the back.  I like it though, it definitely makes a nice addition to my fledgling Greenberg PC.
Posted by William Regenthal at 9:04 PM

Greenberg of course holds a special place in the hearts of those of us who are celebrating Channukah.

He 'lost' essentially four seasons out of the prime of his career while serving in WWII. He volunteered, was rejected for flat feet, supposedly bribed the draft board to reconsider him and he was accepted. He was discharged a bit before Pearl Harbor which prompted him to re-enlist.

Once upon a time I had a chance to buy a Greenberg Exhibit card at a card shop that was closing down. I regret that I didn't pull the trigger on that deal.