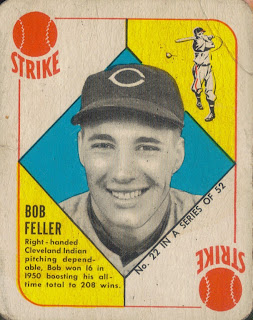 Bob Feller (b. 1917 - d. 2010).  What can I say about one of my all-time favorite pitchers that I haven't already said?  He was the man, plain and simple.  He won 20 or more games 6 times in his career.  He won 27 games in 1940, the year in which he received his highest vote total for the MVP award (2nd place).  That's right, he never won the MVP award.  He also never won a Cy Young Award, but it didn't come into prominence until the latter part of Feller's career.  Feller's career numbers aren't staggering.  He didn't win 300 games.  However, one must remember that he lost three years during his prime after he enlisted immediately following the bombing of Pearl Harbor.  Fitting that his card comes up on Pearl Harbor Day.

He lost most of a 4th year as well. It would be easy to show how he lost around 100 wins to WWII as he was averaging about 25 wins a year before and after. 365 wins would be a pretty impressive total, and probably more indicative of the quality of the pitcher.