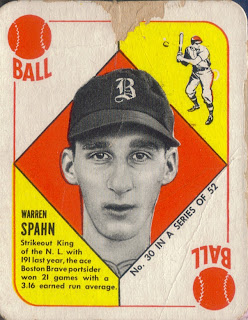 Spahn actually appeared on two Hall of Fame ballots (one of which as when he was still an active player - 1958) and was elected to the Hall in 1973 when named on 83.2% of the ballot.  That means 16.8% of the voters let him off of their ballots.  What were they thinking?