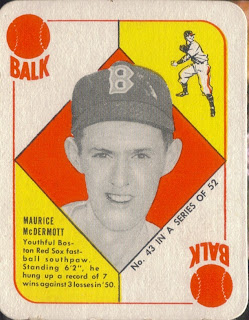 Maurice "Mickey" McDermott (b. 1929 - d. 2003) played in the majors from 1948 to 1958 and 1961 for the Red Sox, Senators, Yankees, A's (Kansas City), Tigers and Cardinals.  He was a graduate of St. Patrick's High School in Elizabeth, NJ, which is significant to me because my Dad, aunt, uncle, grandmother and grandfather were all born in Elizabeth.  They didn't go to the school (they attended a school in nearby Roselle Park), but it is always cool to see people from that area.  The movie 'The Wrestler' took place in Elizabeth...  Just saying.

My dad's uncle grew up with this guy, they were actually pretty good friends! He always tells me this story about how they used to play baseball together, and he used to catch McDermott. He made excuses so that he could leave because Maury would throw it so hard, and he couldn't stand catching him!

So one day, my uncle was doing a gig (he's a singer)at a local bar, and McDermott walked into the bar, with 3 friends of his: Whitey Ford, Yogi Berra, & Mickey Mantle! After his gig, McDermott introduced my uncle to them, and they sat down and told stories about him & McDermott growing up. My uncle admitted to Maury that he was too scared to catch him all along, and all of them laughed at him!

Don't know if I ever told you this, but thought I'd throw it onto this post for you to enjoy!