When I went to the National Card Show this summer, I picked up a catalog for Collect Auctions.  I'm always in the market for places to find signed baseballs a lot cheaper than their Ebay price, so I gave them a look when I got home from the show.  There was an auction ending at the end of August, so I watched it and saw that, when it ended, there were a bunch of hard-to-get Hall of Famers going for more than half of what their autos were going for on Ebay.  I decided that, when they offered their next auction (they have auctions quarterly, it seems), I would try to jump in on a ball or two and see what happened. 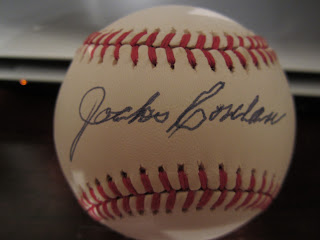 Well, they had an auction ending before I went on my trip to Vegas, so I looked and bid on several baseballs.  I won't get into the ones I DIDN'T win because it is too depressing, but I did get lucky and get two baseballs at fractions of their normal cost.  They're both PSA authenticated, too, so you know I'm happy.

Conlan is my 79th Hall of Fame signed baseball and my 2nd umpire (Doug Harvey being the other).  Stay tuned to see the other baseball I picked up.  Someone who had some clashes with tonight's subject, Conlan.
Posted by William Regenthal at 8:34 PM