I have decided to try out an idea that I had while I was looking for Hall of Fame Autographs on Ebay the other day. There are a LOT of hall of famers who I have never heard of. I thought it might be a good idea to feature a random Hall of Famer every now and then. Hope you guys enjoy. 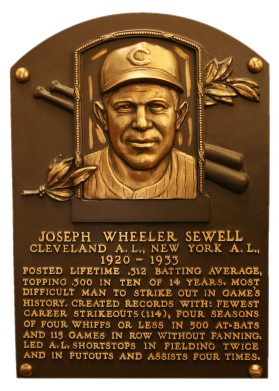 It is amazing to look at Sewell's stats and see just how few times he struck out during any given season. Since he was primarily a shortstop, his 'light hitting' numbers are fairly justified given that the position was not the power position it became later in the century. Had Sewell played longer than 14 seasons, it is reasonable to believe that he would have at least challenged the 3,000-hit plateau. In my opinion, YES, Joe Sewell definitely deserves a spot in the Hall of Fame.

Did you know that Sewell was called up to replace Ray Chapman on Cleveland's roster in August of 1920 after Chapman was struck in the head by a pitch and died?

Posted by William Regenthal at 9:15 PM