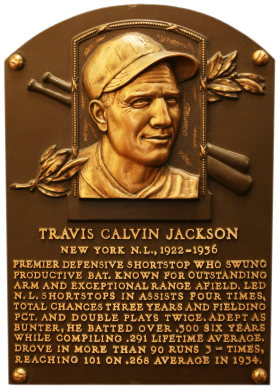 Plaque photo borrowed from www.baseballhall.org
.
Everyone, raise your hand if you knew Travis Jackson (b. 1903 - d. 1987) was a Hall of Famer. Anyone? Anyone? Bueller? Bueller? That's what I thought.At first glance, Travis Jackson does not appear to have the credentials of a hall of famer: 1,768 hits, 135 homers, .291 batting average. Jackson played shortstop from 1922 to 1936 for the Giants. He was elected to the hall of fame by the veteran's committee in 1982 after failing to get more than 7.3% (averaging 2.76%) of the vote during 12 times on the ballot. According to his plaque and profile on www.baseballhall.org, Jackson was apparently a 'premier defensive shortstop.' Hmmm. We will revisit that shortly. Let's first take a look at his hall of fame credentials:

Premier defensive shortstop? I'm not feeling it. Anyone out there who would like to argue Travis Jackson's merits, please comment because my answer is NO, Travis Jackson is not a Hall of Famer. I think he is one of the many shining examples of the flaws in the past incarnations of the Veteran's Committee. One of my friends told me the other day (after reading my 2011 HOF post) that my Hall of Fame would have 5,000 members. After review of Travis Jackson, I think we may be able to agree that 4,999 is a better projection, haha.

Travis Jackson autographed index cards average around $60 on ebay. I only saw one authenticated ball of his and it was selling for $550.

Posted by William Regenthal at 3:00 PM

It sure doesn't seem like he had the credentials to be in the HOF. Then again, what do I know, I'm just a dumb blogger!

I'm puzzled by the fact that he was inducted in 1982 and wasn't part of the many bad VC choices the Frankie Frisch-led Veterans Committee of the late 60s and early 70s made.