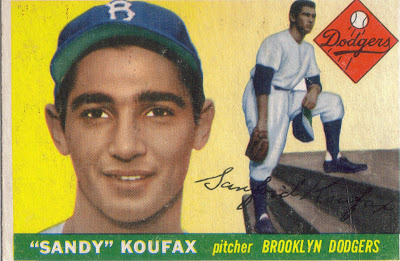 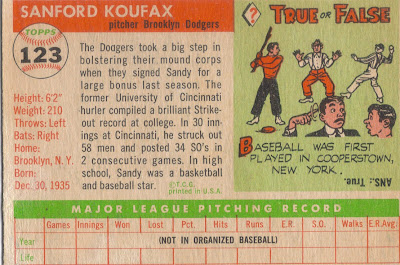 One of the two BIG rookie cards in this set, Sandy Koufax (b. 1935)!!! Koufax played in the majors from 1955 to 1966 for the Brooklyn/Los Angeles Dodgers. Koufax began his career mired in mediocrity from 1955 to 1960, then after the 1960 season, things 'clicked.' From 1961 to 1966, Koufax was the best pitcher in baseball. This run also has Koufax regarded as one of the best pitchers in history. Koufax ended his career after losing to the Orioles in the 1966 World Series, citing his desire to want to be able to lift his arm later in life as the reason for his early retirement (he was 30). He retired with a record of 165-87, 2,396 strikeouts and a 2.76 ERA. Some of Koufax's other accomplishments:

WOW! Now that is a beautiful card, I don't have anything of Koufax, sweet part of the set!